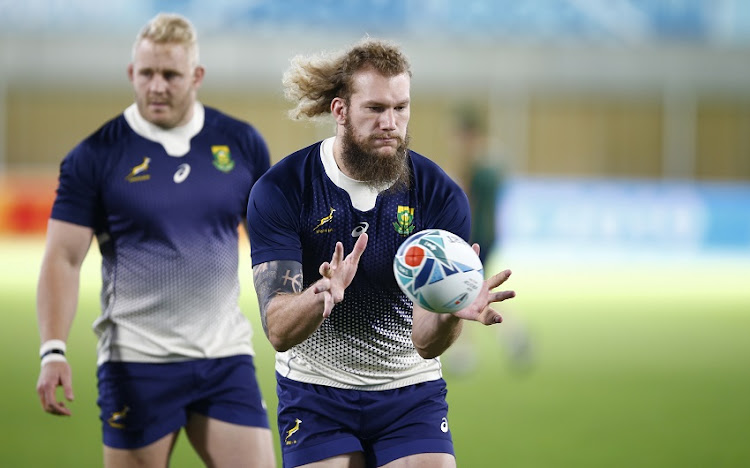 Injured Rugby World Cup-winners Lood de Jager‚ RG Snyman and Warrick Gelant are still in the running for selection for the series against the British &amp; Irish Lions‚ but time is not on their side.

Springbok coach Jacques Nienaber will name 45 players for the series against Georgia and British & Irish Lions next Saturday leaving the injured trio in a race against time to prove their battle readiness.

Nienaber stressed that fitness was not the only criteria for selection but that players would also have to show they are endowed with the confidence required to play in a daunting series against the Lions.

De Jager‚ who dislocated his shoulder in the World Cup final and who suffered another shoulder injury upon his return‚ is currently sidelined with a broken leg. Fellow lock Snyman‚ who ruptured his anterior cruciate ligament last August‚ is in the final stages of rehabilitation while utility back Gelant suffered the same fate in November last year.

“We are following their rehab closely‚” said Nienaber. “Apart from the guys who retired after the World Cup the 30 others are in the running but it is touch and go for some of them.”

Although winning the series against the Lions is paramount‚ the Boks’ brains trust is loath to risk players to more injury by pushing them into battle prematurely.

“Only 25 percent of our Tests this year are against the Lions‚” Nienaber reminded.

“Sure‚ they are the most important Tests of the year but we will have to take a broader view when it comes to selection because after the Lions series we have the Rugby Championship and an end-of-year tour.”

Uncapped Stormers lock Salmaan Moerat‚ who has a neck injury‚ is also being closely monitored‚ but another contender for a place in the Bok group Sikhumbuzo Notshe‚ appear up against it in his rush to recover from a ruptured patella.

SA Rugby director of rugby Rassie Erasmus said the two Tests against Georgia will be played on consecutive Fridays. The matches will be played on July 2 and 9 to avoid scheduling clashes with the British & Irish Lions’ matches against the Lions and the Bulls on July 3 and 10 respectively.

Erasmus announced that the Springbok coaching group will also take charge of the South African A team to play the British & Irish Lions. The Boks will be sharing a bio-bubble with the tourists and they are cognisant of keeping the numbers down.

To match the tourists‚ Erasmus said the entire Springbok group would be vaccinated for the series adding that local teams will have to go into a 10-day quarantine preceding their tour matches.

Nienaber‚ who was appointed Bok coach last year‚ has had to patiently wait to take charge in his first match. “Yes I have butterflies‚ but I cannot wait‚” said the coach.