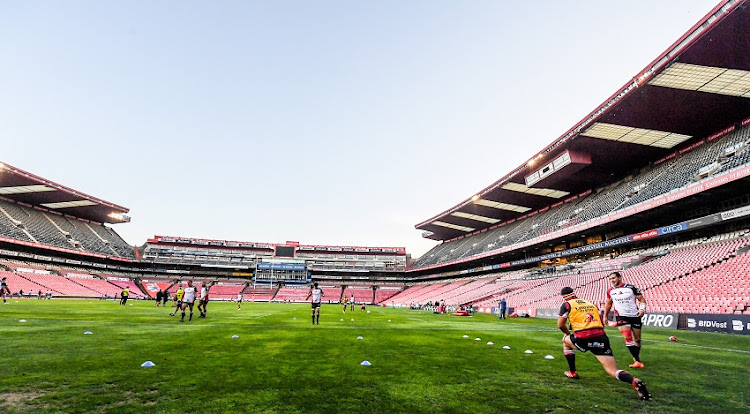 The box shouldn't even be in sight he insists.

Just like building a house on an iceberg with global warming at its most searing‚ becoming general manager at a 62 000-seater stadium in a pandemic might give rise to a lament or two.

The pandemic has brought huge strain to rugby's traditional revenue sources. However‚ the Lions‚ through EPS‚ have actively pursued other streams of income and you could say they are moving heaven and earth.

EPS‚ it has been argued for too long‚ is located in an undesirable part of the city. It sits atop the origins of the Jukskei River and its potential is being untapped.

“We have pumps that run 24 hours a day‚” Burger pointed out. “If those pumps break this becomes the biggest municipal pool in the country because the field will be two-metres under water.

“Before lockdown they decided to build a purification plant and then put the water through an osmosis process. That allows us to bottle our own water‚” said Burger.

Their capacity is 28 000 litres a day but they have no intention of competing with the big brands. “We want to target specific markets. We don't want to compete with the big players in that space.”

EPS isn't just harnessing what they have below.

“We have issues with generating and maintaining power‚” Burger stated matter of factly. “We have three stadiums that have amazing space on theirs roofs in a city where the technology is well advanced to generate solar power. We can produce our own energy and we can create a surplus and apply for a licence at Nersa (National Energy Regulator of South Africa) and sell that to our neighbours.”

Burger said that precedent has already been set in South Africa.

“We can also sell what we generate to the local authority and the municipality can put it on the grid. That is more long term but something that we are looking at.”

Their blue sky thinking doesn't stop there. Plans are in motion to develop the wider precinct so that it becomes 'the biggest inner city beautification projects in South Africa'.

“We have to create a multi function facility‚” insists Burger. “We are in advanced negotiations with investors and developers. The area will benefit from a hotel‚ as well as components that includes retail‚ business and living space.

“As part of the redevelopment we are also looking at adding a Gautrain stop at Ellis Park.

This will be a total redevelopment of the entire precinct. It won't just benefit the city but it will contribute to the sustainable of EPS‚” said Burger.

They are also keen to strengthen existing‚ while forging new bonds. They want to be a concert venue again and they want to stage soccer matches on a more regular basis.

“We housed two teams in the PSL's bio bubble. It was so successful we are in discussions with three PSL and one NFD team that want to make this their home ground‚” explained Burger.

“Pirates‚ Bidvest Wits‚ TS Galaxy and Sekhukhune United all used this facility in the last three‚ four months and were really impressed.”

The pandemic has and will continue to take a lot. However‚ because they are unbent by outside influence adaptability‚ resilience and resourcefulness can help restore hope.