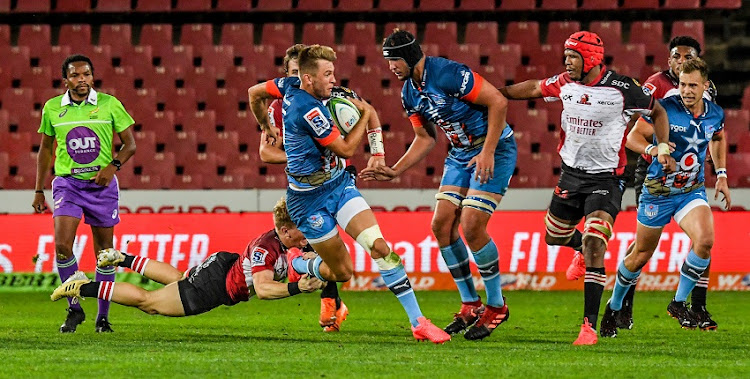 David Kriel of the Bulls with the ball during the Super Rugby Unlocked match between Emirates Lions and Vodacom Bulls at Emirates Airline Park on November 07, 2020 in Durban, South Africa.
Image: Sydney Sehibedi/Gallo Images

The Bulls called on their superior muscle and experience to strangle the life out of an occasionally sprightly Lions in their Super Rugby Unlocked match at Ellis Park on Saturday night.

They won 30-25 and apart from the third quarter the Bulls' forwards generally kept a firm grip on proceedings as a high error rate and poor discipline caught up with the hosts in the second half.

Duane Vermeulen, Ivan van Zyl, Morne Steyn and Marco van Staden were instrumental in setting up the win for the visitors who are at the top of the table.

The Bulls returned from the break with renewed energy and vigour and bossed the breakdowns and at times the scrums. The line-outs were messy but mostly favoured the Bulls.

Elton Jantjies gave the Lions the early lead but it was soon cancelled out by one from Steyn.

An emboldened Bulls team then eschewed an opportunity to kick for goal in the 12th minute as they were trying to capitalise on their territorial ascendancy.

They soon profited when from a driving maul in which their organisation and strong leg drive helped Joe van Zyl crash over for a converted try.

The Bulls dominated the first 15 minutes and enjoyed 78 percent of the possession but the Lions gradually played themselves into the contest.

Jantjies, perhaps sensing that much of the Lions' magic needed to be channelled through him played on the edge, taking undue risk at times early on. His game lacked the pin point accuracy that had been a recent hallmark and the Boks pivot.

There were times the Lions scrum applied the squeeze on the Bulls' and the hosts pounced after gaining field position from a penalty they earned from that facet after 25 minutes.

After build up work in which the ball was taken through the phases sans what appeared the be meaningful progress it was quickly whipped to the left by Gianni Lombard who found centre Burger Odendaal was unchecked.

The Lions firmed their grip laying greater claim to the ball as the first half wore on. Hooker Jaco Visagie and scrumhalf Morne van den Berg for different reasons squandered two positions of promise for the hosts when they were hot on attack.

As the half time whistle approached they continued to put the Bulls under pressure and the Lions' endeavour was rewarded when following a few attacking line-outs scrumhalf Morne van den Berg fell over to score. Jantjies converted to give the home team a 15-10 lead at the break.

By then the break the Lions had 57 possession but the Bulls emerged from the tunnerl with greater urgency.

A Steyn penalty and an opportunist try from the inform Stedman Gans got the Bulls back into the lead.

The Lions however defiantly convulsed as the Bulls held an eight-point lead. Courtnall Skosan beat the initial Bulls chase line and gassed his way into a gap offloaded to replacement flank Marnus Schoeman who quickly transferred to Wandisile Simelane who waltzed past four defenders for a fabulous try.