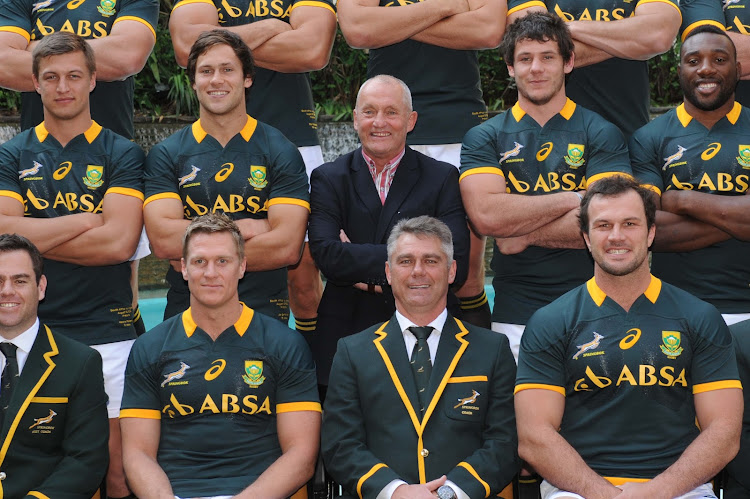 A file photo of John Robbie, who toured Aparthed South Africa with the British and Irish Lions in 1977, pose for a team picture with the Springboks in Tshwane in 2014.
Image: Lee Warren/Gallo Images

This weekend marks exactly 40 years since the British and Irish Lions kicked off their Test series against the combat starved Springboks at Newlands.

Despite a one-off match against the World XV to mark the opening of Loftus Versfeld in 1977 and two clashes against a South American side earlier in 1980‚ Bill Beaumont’s Lions was the first team of international repute to play the Boks in four years.

As a 24-year-old‚ he didn’t think so at the time but Lions scrumhalf John Robbie believes it was wrong to come to South Africa which was in the grip of a repressive regime.

“It is something I have to live with‚” said Robbie.

“I have this great contradiction that it was a great rugby experience and highlight of my rugby career.

"Later in life I would be interviewing people who were in jail while I was touring here. I’ve learnt to forgive myself and move on.”

Fellow Irishman Tony Ward‚ who contributed 18 points at Newlands in the opening Test which the Springboks won 26-22‚ was so appalled by what he saw on that tour he refused to tour South Africa when Ireland came here a year later.

However‚ because South African rugby had been starved proper international competition and the walloping the Boks received at the hands of Willie-John McBride’s 1974 Lions‚ the series was highly anticipated by the local rugby establishment.

“I always say there are two things you want to do as a rugby player. You want to tour New Zealand and play the All Blacks and you want to play against the Lions. I was fortunate to do both‚” said Bok flyhalf Naas Botha.

He concedes ‘politically it was a tough time’ but that the Boks had a score to settle.

“In the build-up we were very much reminded of the 1974 series‚” recalled Botha.

“It was to serve as a motivating tool.

“It was the first series against serious opposition for a lot of guys‚” said Botha of the Bok team that had captain Morne du Plessis and Moaner van Heerden as the only players with more than 10 caps.

Isolation had frozen many talents.

That‚ however‚ quickly thawed at Newlands as the hosts scored five tries compared to the Lions’ solitary effort through tighthead Graham Price.

The Bok backline played with more freedom and exploited the tourists’ chinks.

They routinely caught Lions’ fullback Rodney O’Donnell out of position.

“They shot into a big lead‚ the Lions ground them down and it looked like it could be a draw but then Divan Serfontein on debut scored the winning try‚” recalled Robbie.

Botha with mischievous fondness‚ remembers a ruck close to the Lions’ tryline with the Boks in search of that match winning score.

“Louis (Moolman) and Moaner cleared that ruck and that the ball virtually just popped out which allowed Divan (Serfontein) to score.”

The 1974 series infamously produced several violent flashpoints and the 1980 series looked destined to go the same route after Lions’ No8 Derek Quinnell smashed Du Plessis in the face shortly after kick-off.

Robbie was impressed with the Bok temperament for letting that one slide but years later Du Plessis explained to him he simply didn’t know who the culprit was.

“You sure it wasn’t a Northern Transvaaler that hit him‚” enquired Botha who can’t recall the incident‚ jokingly.

Robbie said Rob Louw’s speed helped make the difference up front‚ while the attacking dimension brought by Gysie Pienaar from fullback further separated the teams in the Boks’ 3-1 series win.

“That team gelled‚” Botha said of the team that contained players from five different regions‚ including Ray Mordt and David Smith from the newly independent Zimbabwe.

In fact‚ that’s where Robbie found himself when he got the call to replace the injured Terry Holmes.

“I had actually played an invitation game in Bulawayo and got the call to join the team. I sat on the bench in the first Test and I remember it like yesterday.

“I was terrified and partly exhilarated. In 1977 I had a good chance of going on the Lions tour to New Zealand but then I broke my leg against France.”

Robbie got another crack and he and Botha‚ although at opposite ends‚ delight in a rugby memory that for so long divided the world.