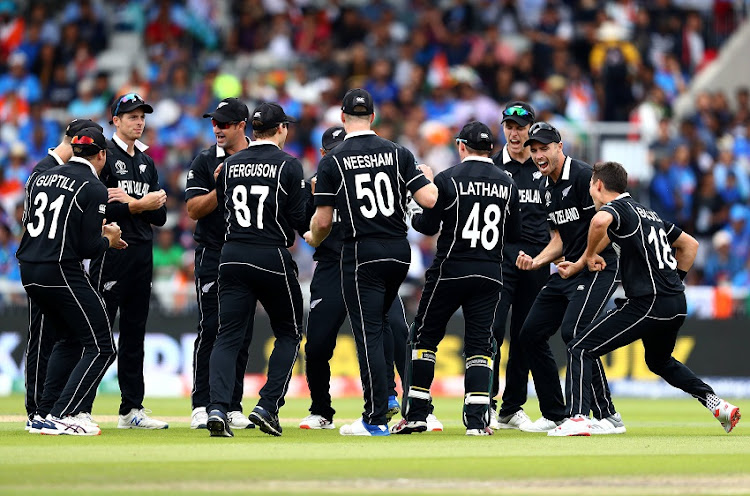 The winners wore black‚ the losers were blue‚ and the men’s World Cup is alive and kicking all the way into its last few days.

In one of the most rivetting one-day internationals yet played‚ New Zealand beat India by 18 runs in their interrupted semi-final at Old Trafford on Wednesday.

The other team in Sunday’s showdown at Lord’s will be decided at Edgbaston‚ where England and Australia will play the other semi on Thursday and‚ if needs be‚ Friday.

New Zealand added 28 runs off the 23 balls they faced on Wednesday to complete an innings that rain on Tuesday halted at 211/5.

The day’s drama started when Ravindra Jadeja‚ in the space of two deliveries‚ undid New Zealand’s chances of setting a bigger target.

The first of those balls‚ the 11th of the day‚ was bowled by Jasprit Bumrah and smeared to midwicket by Ross Taylor — who turned for two but couldn’t beat Jadeja’s precise pick-up-and-throw for a direct hit on the only stump he could see.

Then Tom Latham tried to heave Bhuvneshwar Kumar over the midwicket fence — where Jadeja held a superbly judged catch.

Taylor was gone for 74‚ grafted hard off 90 balls‚ and Latham for 10‚ and five balls later Matt Henry was also caught in the deep.

And if you thought that was crazy‚ you ain’t seen nothing yet.

India crashed to 5/3 in the first 19 deliveries of their reply — Rohit Sharma‚ Virat Kohli and KL Rahul‚ their bristling top three‚ all among the top 15 runscorers at the tournament‚ gone for a single each; the first time that has happened in all 4 190 ODIs yet played.

Sharma edged the fourth ball he faced‚ a pearler of an out-swinger from Matt Henry‚ and was caught behind. Not for 56 innings in the format has he had a shorter innings; a stream of success that started in August 2017.

Most pertinently‚ he had reeled off centuries in his previous three innings at this World Cup‚ against England‚ Bangladesh and Sri Lanka‚ to go with those he scored earlier in the tournament against South Africa and Pakistan.

But as he trooped off on Wednesday he looked as dazed and confused as a clueless No. 11.

Seven balls later Trent Boult bent an inswinger into Kohli’s pads and Rod Tucker raised the finger of fate. Kohli referred the decision and the review showed the ball only just clipping the bails.

India’s captain‚ a Goliath of the game‚ had been downed by a sliver of the ball as small as David’s pebble. He fumed off the field like Daddles the duck himself‚ shaking his head as he went.

Three deliveries after that Henry had his second after Rahul was caught in two minds about playing or leaving an out-swinger — and classily caught by a diving wicketkeeper Latham.

Not a lot seemed to happen for the next 40 balls‚ 33 of them dots‚ except that 19 runs were scored.

Then Dinesh Karthik half fended‚ half bunted Henry from outside off stump to the left of gully. Cue Jimmy Neesham to swoop and claim‚ one-handed‚ perhaps the catch of the tournament and reduce India to 24/4.

Rishabh Pant and Hardik Pandya pretended they weren’t two of the most destructive hitters in the game in the cause of restoring order‚ which they did in a stand of 47 off 76 balls.

It ended when Pant could fake it no longer and heaved left-arm spinner Mitchell Santner to long on. Santner did for Pandya in similar fashion‚ and also for Pant’s score of 32.

Between those dismissals you could feel the hope rising from the crowd‚ significantly smaller than Tuesday’s but still predominantly India heavy‚ as Dhoni crossed the boundary and made his way once more unto the breach.

Did 2011’s captain fantastic‚ now an ageing uncle‚ still have what it took?

The question wasn’t quite answered because Jadeja returned to the fray to do his damnedest to win it for India with a breathtaking innings of guts and gumption.

The 116 he shared with Dhoni was a World Cup record for the seventh wicket‚ and when it ended — by way of skied drive to mid-off in Boult’s last over — India’s serious hopes ended‚ also.

Jadeja hammered his 77 off 59 balls with four fours and as many sixes‚ a wonder that no-one who saw it will forget. Neither will Dhoni’s brutish cut for six off Lockie Ferguson to narrow the equation to 25 needed off 11 balls fade in the memory.

The last run Dhoni completed took him to 50‚ but he didn’t raise his bat as he sauntered off.

Classy to the end‚ uncle.