Siya Kolisi heaps praise on the Bok he calls ‘Majaivane’ 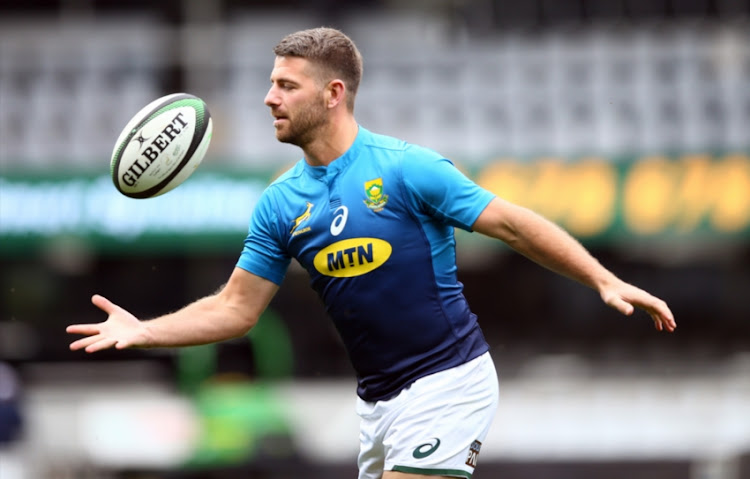 Springbok captain Siya Kolisi has heaped praise on fullback Willie le Roux who will clock his half century of Test matches for South Africa in the Rugby Championship against New Zealand at Loftus on Saturday afternoon.

SA Rugby has confirmed that Mamelodi Sundowns coach Pitso Mosimane will walk the Boks out to the pitch as the official flag-bearer.

Last season‚ this milestone seemed a long away for Le Roux who plies his trade for Wasps in England‚ as former coach Allister Coetzee preferred Andries Coetzee.

“We are very proud as a team for his achievement of reaching 50 caps‚” said Kolisi on Friday about the man he calls ‘Majaivane’ which means the one who likes to dance.

“What can one say about ‘Majaivane’ [the one who dances a lot] – he is one of the funniest guys in the team‚” Kolisi said smiling.

“He really works hard and the one thing I admire about him is his passion for the game. Every time he scores a try‚ he runs away from the rest of us in wild celebrations and that shows that he is passionate.

“Whenever he gets the call-up‚ he gets so excited and phones us to tell us about it. He really deserves this moment because not too many guys have reached 50 caps for their countries.

“He is a team man and he told us that it is not about him but the team on Saturday.”

Willie to add sting for the Boks after Wasps release

Fullback Willie le Roux has had an eventful two weeks where he has been part of teams that have made history and he is back in Springbok colours to ...
Sport
3 years ago

Le Roux‚ who scored one of the five tries for the Boks when they stunned the All Blacks in Wellington three weeks ago‚ was also praised by coach Rassie Erasmus who admitted that he misjudged the fullback earlier in his career.

“When he came to the Stormers from Boland on a trial‚ I told him that he was not good enough but he has definitely proven me wrong‚” Ersamus said.

“I am happy that he has reached this milestone‚ he is the calming influence and brings experience to the back three.”

Kolisi also enthused about rising star and winger Aphiwe Dyantyi‚ who has excelled beyond expectations in his debut season with the Boks.

“He has done really well and guys around him have helped him. When we sit down with him behind closed doors‚ his humbleness comes through and that makes you want to play with him.

“I am happy how he has done in his first year with the national team.”

Kolisi has also been impressed by fullback Cheslin Kolbe‚ who will earn his fourth Test cap on Saturday and was one of the try-scorers in Wellington.

“I get emotional when I talk about him because we are good friends. For me‚ I can see that he just want to be here because he loves the team environment‚ appreciates every moment of being here.

“He went the other way to be here and he just want to make sure that he wants to give his best all the time. He deserves to be here and you can see that at training‚ with his tackles as he puts his body on the line.

“He is a special guy and we can put him in a place where he can do wonders for the team.”