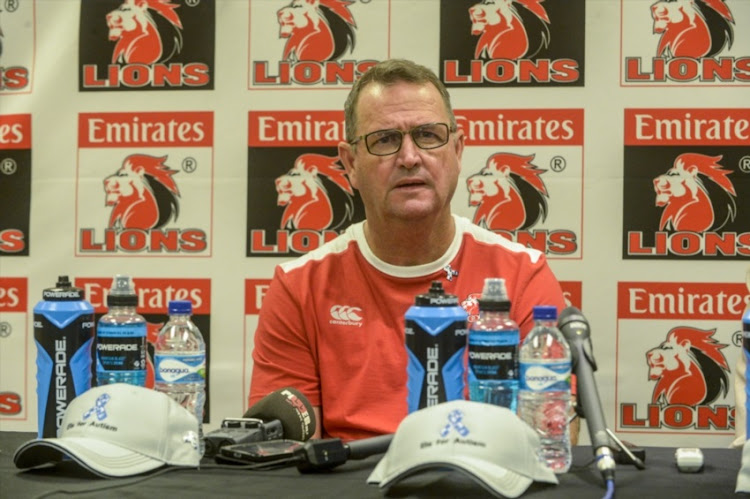 His guard is usually up when fronting the media. When on Thursday‚ however‚ he was asked about how the Lions’ Super Rugby credentials had been questioned in the New Zealand media‚ Lions coach Swys de Bruin roared to life.

The Kiwis had been stridently arguing the Lions have no business being at the‚ well… business end of the competition.

“That is their perception. All I can tell you is that we never moan about travelling four weeks. They travel two.

It makes a helluva difference. Go look at our results in week three and week four overseas. Just get on with the job‚” he ranted.

In a column one Kiwi scribe even expressed the wish that the Crusaders beat the Lions by 40 points in the final‚ were they both to qualify for the tournament’s climax. That‚ he argued‚ would serve justice on a team that lost to the hapless Blues and Reds in the league stages.

De Bruin stressed that the Lions take whatever comes their way in their stride.

“We are a no moan team. I almost feel sorry that I said that now because it sounds like I’m moaning.

“Hell‚ sport is an interesting thing. It can’t always be the ref‚ or this‚ or that‚ or the competition format‚ or injuries. You’ve got to play the hand that is dealt for you.

When asked whether he‚ too‚ yearns for a more equitable tournament De Bruin left no room for ambiguity.

The future of flyhalf Elton Jantjies and lock Franco Mostert is yet to be determined. The latter has already been announced as an acquisition at Gloucester‚ but the Lions are in dispute with the club.

The Lions contend Gloucester had no right to sign Mostert when they did. Mostert is apparently keen to stay‚ but he still needs to get out of his Gloucester deal.

“There were a lot of rumours that we were going to lose a lot of players but the good news is that a lot of the great guys are staying‚” said De Bruin.

He couldn’t however‚ give a final answer on the where Jantjies will play next season. It is understood that Jantjies’s decision is partly dependent on what remuneration he can get from SA Rugby.

His contract will have to be topped up by the national body‚ and the same applies to centre Lionel Mapoe‚ who played no part in the June internationals. In fact‚ his last Test was in June last year when the Springboks played France in Durban.

Fellow midfielder Harold Vorster has opted to play for the Panasonic Wild Knights in Japan during the Currie Cup‚ but should be available for next year’s Super Rugby season.

The Lions’ supporters will hope contract negotiations won’t impact the team’s performance at the most sensitive stage of their Super Rugby campaign.