No official word on Allister Coetzee’s fate after review 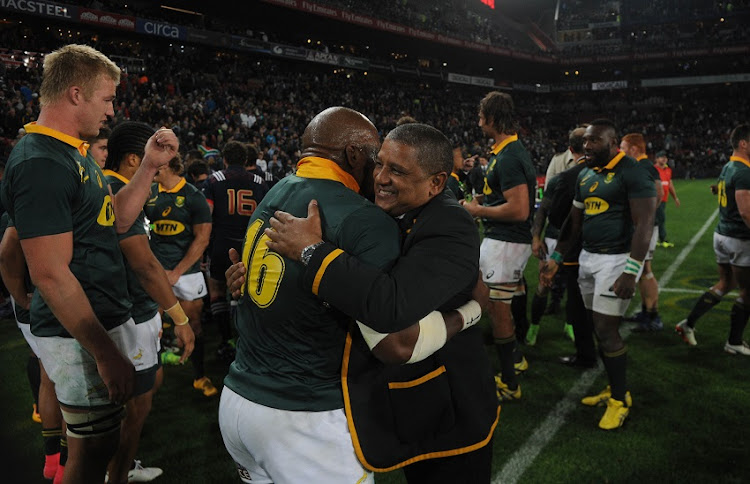 No formal announcement on the future of Springbok coach Allister Coetzee’s employment will be made this year after he underwent a review process during the week.

Officially SA Rugby won’t comment on any details surrounding the process this year and remain tight-lipped about whether Coetzee will survive after another poor season for the Springboks‚ which yielded only seven wins in 13 Tests.

Unofficially though‚ it is understood that the delay in making a formal announcement is due to SA Rugby wanting to fulfil every legal and moral obligation as it looks to cut Coetzee loose.

Sources have confirmed he met with director of rugby Rassie Erasmus on Wednesday and will be removed from his post in due course once all the labour law hurdles have been cleared.

An interim coaching setup‚ initially headed by Erasmus‚ will handle the Springboks’ planning in the New Year.

SA Rugby‚ once they have formally sacked Coetzee‚ might advertise the position but it’s understood that after losing R23.3m in their last financial year‚ the budget for a high profile overseas coach is limited.

Erasmus and defence guru Jacques Nienaber‚ who both returned from a successful stint at Munster‚ will head up an interim coaching team.

The likes of Kings coach Deon Davids (who is already on the SA Rugby payroll)‚ scrum coach Pieter de Villiers and skills coach Mzwandile Stick are likely to be utilised as well.

With England in SA for a three-Test series next June‚ Bok planning cannot be left in limbo and despite many other tasks on his plate‚ restoring the Springboks to something resembling a world-class team will be Erasmus’ main priority next year.

The Boks under Coetzee have won 11 of 25 Tests‚ or 44% of their matches while they have racked up a series of unwanted firsts from a record 57-0 loss against the All Blacks to a first ever loss to Italy over the past two years.

Coetzee survived the axe after his first year in charge despite a dismal 33% winning ratio (four from 12) because his performance clause only activated after two seasons in charge.

He needed to reach a 65% winning ratio by the end of his second season to meet the minimum requirement and he has fallen well short of that target while other performance indicators such as transformation are at a bare minimum too.

There was some sympathy for Coetzee at the end of 2016 due to his late appointment and lack of preparation time.

Other factors such as a player brain drain‚ poor fitness and skills levels of players and the lack of an integrated playing style are all issues out of his control.

But even so‚ Coetzee’s team has consistently failed to improve and despite what he maintained in 2016‚ his side actually became worse as the season progressed.

In 2017‚ despite having the management group of his choosing‚ planning sessions‚ more time with the players‚ a pre-season camp in Plettenberg Bay and a fitter group of players‚ the Boks’ performances ranged from acceptable to dismal.

When Coetzee took over the Boks were ranked third in the world and now they are sixth.