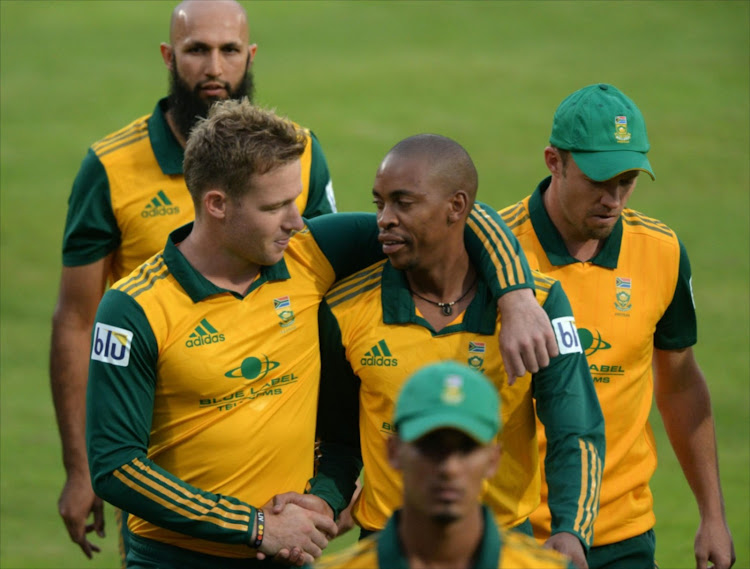 When Aaron Phangiso queried the huge difference in earnings between the senior players and those on the bench during his time in the Proteas setup, the spinner said he was stunned by the answers he got.

The former Proteas white-ball spinner said he was “shocked” by the response he got when he questioned why the players who are on the bench did not get the same match fees as their colleagues on the pitch.

Phangiso was giving testimony at the public hearings of Cricket South Africa’s (CSA) transformation inquiry, which were established to investigate racial discrimination within the organisation, and to recommend remedial action.

He said people assume that the players on the bench still get all the match fees.

“Which is not true,” said the now 37-year-old Ga-Rankuwa-born cricket who has made the most appearances for the Lions and is the all-time leading wicket taker of the Johannesburg union.

“If you are a 12th man and wearing a bib, there was one match fee allocated to four players,” he said.

“There will always be 15 players on tour and always going to be one match fee per four guys. So the R25,000 was divided between four guys.

Phangiso said he spoke to then team doctor and manager Dr Mohammed Moosajee, who promised to speak to the CSA management and revert back to him.

“I said doc look ‘I have a big problem with this. Out of the touring squad I am probably the only guy that [misses] out on a whole lot of games.

“Some guys played three games, some play four. The World Cup and so many tours, I went to that, and I didn’t get game time.

“I told doc that we need to relook this. I can’t be in India for the same amount of time, with the same guys I bowl to in the nets, then I take home less than R30, 000 and they take home R100,000 plus home, that doesn’t make sense.

“After speaking to team manager [Moosajee] he saw a bit of reason and he did say ‘let me speak to the senior guys in the team’.”

Phangiso said he also spoke to then captain AB de Villiers and senior player Hashim Amla and was stunned at the answers he got.

“I remember I had meeting with AB de Villiers and Hashim Amla. I had a meeting with them and I said ‘guys this is my situation’.

“You know the response I got from the senior players for me was shocking, because it just showed that there would always be people who think for themselves before anything else.

“The response was that ‘Phangiso, you expect that a guy sitting on the bench must get the same as the guys who are playing’?. The ‘I said yes, why not’.

“This is money that will not come out of your salary. It is just us talking to [players union] the South African Cricketers’ Association and say ‘look this is the situation that is going on’.”

Phangiso said he also talked to some players from other countries to enquire about whether reserves in other international teams get the same match fees as those on the field or not.

“I remember Chris Gayle played for the Lions and I made good friends with him and also Daren Sammy.“They did say that when they tour as the West Indies, each and every player get the same amount of match fees, because there is already a difference anyway in your salaries.

“Obviously Amla will earn more than me because he played all formats. Other countries didn’t understand why was it the case in South Africa.

“I had lengthy discussions and I showed senior players the reason and you know what, I think they did see the reasons.

“They said they will talk to Saca and two days later they came and said ‘look we spoke to Saca and the best we can do is add extra match fee’, meaning instead of four guys sharing one match fee, now the guys were sharing two, which is R25,000 divide by two.”