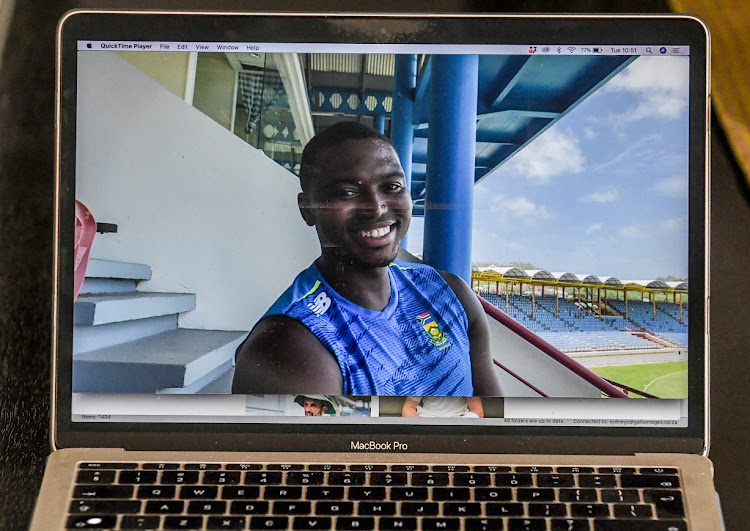 Lungi Ngidi during a virtual press conference from the Caribbean on June 8 2021.
Image: Sydney Seshibedi/Gallo Images

Proteas fast bowler Lungi Ngidi says the team are united despite some of the players opting not to take a knee in respect of the Black Lives Matter (BLM) movement at the start of the first Test against the West Indies in St Lucia on Thursday.

In the build-up to the match, captain Elgar said the matter was discussed and it was up to individual players whether to take a knee or not.

“Not at all,” was Ngidi’s response when he was asked if the issue had created divisions in the team.

“You know we come from a diverse country and to be honest I don’t think it’s fair to speak for other people. Everyone is entitled to their own choices in life – I have been very clear in my stance but in terms of the team there is no division at all.

“I think you can see today we were playing, everyone is happy for everyone and we are playing for South Africa, and that’s all we are trying to do as players. It was about everyone entitled to their own choice, whatever you wanted to do you were allowed to do. It was that simple.”

Seamer Lungi Ngidi showed all his guile to take five wickets for 19 runs as South Africa skittled West Indies for 97 and took control on the first ...
Sport
7 months ago

Ngidi ended the first West Indies innings with highly impressive figures of 5/19 as the Proteas cheaply bowled out the hosts for 97, their lowest Test total against South Africa.

“It’s been a work in progress, it’s been a very long time since I have taken a fifer and it felt good to have taken one.

“It’s been a lot of hard work behind the scenes. At one stage my selection was doubtful for the Test team and I had to work very hard in the gym and on fitness and things like that,” he said.

“I think the most important thing was the skill side of things, being able to swing the ball away from batsmen now and I have loved bowling with the Duke ball because it seems to swing all day.

The wicket at the Daren Sammy Cricket Ground in St Lucia has reportedly been prepared to suit fast bowling and‚ according to Proteas paceman Lungi ...
Sport
7 months ago

Proteas fast bowler Lungi Ngidi says he loves the surroundings in St Lucia in the West Indies but cautioned that the weather may be a tricky thing to ...
Sport
7 months ago

Proteas middle order batsman and limited overs captain Temba Bavuma is doubtful for the first Test against the West Indies at the Daren Sammy Cricket ...
Sport
7 months ago

Ngidi on quarantine: 'I actually enjoy it‚ works out pretty nicely for me'

While players and coaches alike pull their hair out and bounce off the walls in hotel rooms in frustration over quarantine‚ Proteas bowling star ...
Sport
7 months ago
Next Article