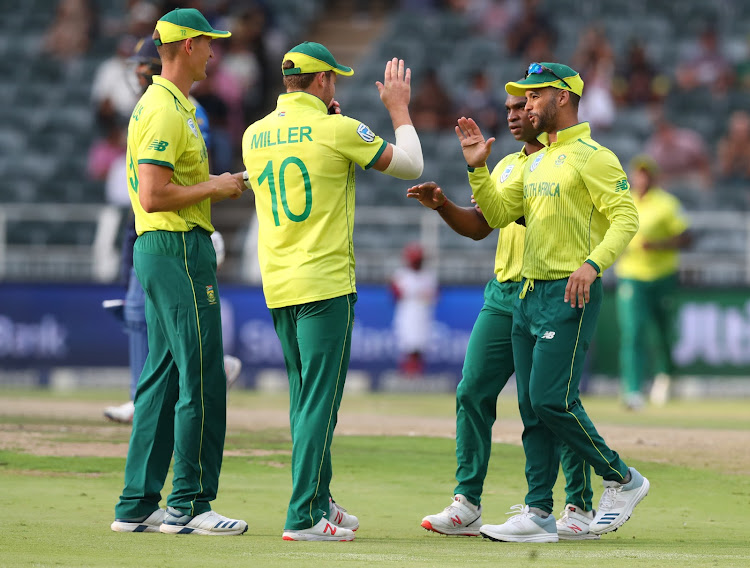 SA players celebrate a wicket during the third and final T20 International match against Sri Lanka at the Wanderers Stadium in Johannesburg on March 24 2019.
Image: Samuel Shivambu/BackpagePix

Any disruption to the Twenty20 World Cup in Australia later this year would have serious financial implications for most of the cricketing nations, Pakistan Cricket Board (PCB) Chairman Ehsan Mani said on a PCB podcast.

The COVID-19 pandemic has halted professional cricket, like other sporting events, across countries, clouding the outlook for the format's flagship tournament that is scheduled to begin in the city of Geelong, southwest of Melbourne, on Oct. 18.

"The World T20 in Australia, if that gets disrupted then the financial fallout from that will be very big," Mani said.

"The distributions they (the International Cricket Council) give to members, many boards, including us, will feel the pinch of it."

The ICC, which distributes profit from its tournaments among member countries, is working on contingency plans but expects the World Cup to go on as scheduled.

Mani, who chairs ICC's Finance and Commercial Affairs committee, said PCB was preparing for the worst.

"Financial controls are tight, we are not spending over what we earn so in that sense, we will probably be all right in the short term," the former ICC president said.

"But if it goes into next year and ICC distributions don't come in ... obviously we have to plan", he added.

PCB will also be signing a new TV rights deal this year.

The absence of bilateral series against India, because of soured political relations between the neighbours, would hurt but Mani said there was not much PCB could do about it.

"Definitely it's a loss but we are not even thinking about it," Mani said.