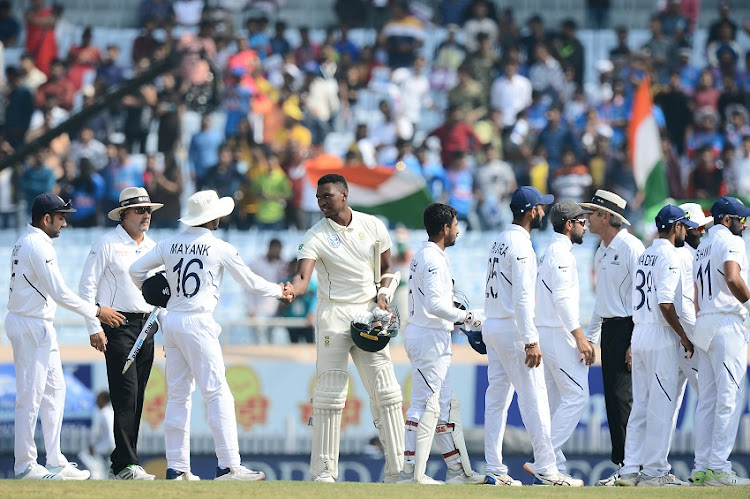 Ruthlessness. Of the many factors that separated India and South Africa in their men’s test series‚ that’s up there with the most significant.

Faf du Plessis knows it‚ and he should.

Having presided over South Africa’s worst series in 83 years — not since 1936 have they endured consecutive innings defeats — he was a good choice to explain it all.

“The way the Indian seamers especially showed us as a South African fast bowling attack how to bowl speaks volumes for this series‚” Du Plessis told reporters in Ranchi on Tuesday after India won by an innings and 202 runs in less than two-and-a-half days of actual playing time — more than half of which India spent batting.

They lost nine wickets before declaring after 116.3 overs‚ and needed only 104.2 to dismiss South Africa. Twice.

“Seam bowling is one area; spin‚ they were better than us.

“From a batting unit [perspective]‚ exceptional ruthlessness in the way they put massive scores on the board.

“That’s one of the reasons why mentally we were probably so weak towards the end.

“The relentless ruthlessness in the way that they put big totals on the board.

“We don’t want to be mentally weak. Obviously you try as hard as you can‚ but their ruthlessness right through this series — you just feel like there’s no opportunity or no moment in the game when you can hide.

“It’s constant. Your body is tired‚ your mind is tired and then you make mistakes.

“That’s what makes them such a powerful team — the ruthlessness. That’s where we’re falling short with the batting.

“They didn’t have that. They had huge scores.

“And also from a fielding point of view‚ it’s tough to say that‚ but they outfielded us.

“The energy that they showed‚ it was a complete performance and we were outplayed.”

That was no less true on Tuesday‚ when the Indians needed only a dozen deliveries to take the last two wickets they needed to clinch the series 3-0.

Debutant left-arm spinner Shahbaz Nadeem had Theunis de Bruyn caught behind before‚ with his next delivery‚ catching Lungi Ngidi’s mighty mow after it ricochetted off non-striker Anrich Nortjé’s wrist.

With that another triumph was added to a list that already featured victory by 203 runs in Visakhapatnam and by an innings and 137 runs in Pune — which was South Africa’s biggest loss to India until Tuesday.

The difference of 53.91 that looms between South Africa’s batting average for the series — 23.01 — and their bowling average — 76.92 — is an unwanted record for all their rubbers since readmission.

All told South Africa snared 25 scalps and India 60: still another worst for them measuring the difference between them and their opponents in a series‚ and there are plenty more where those came from.