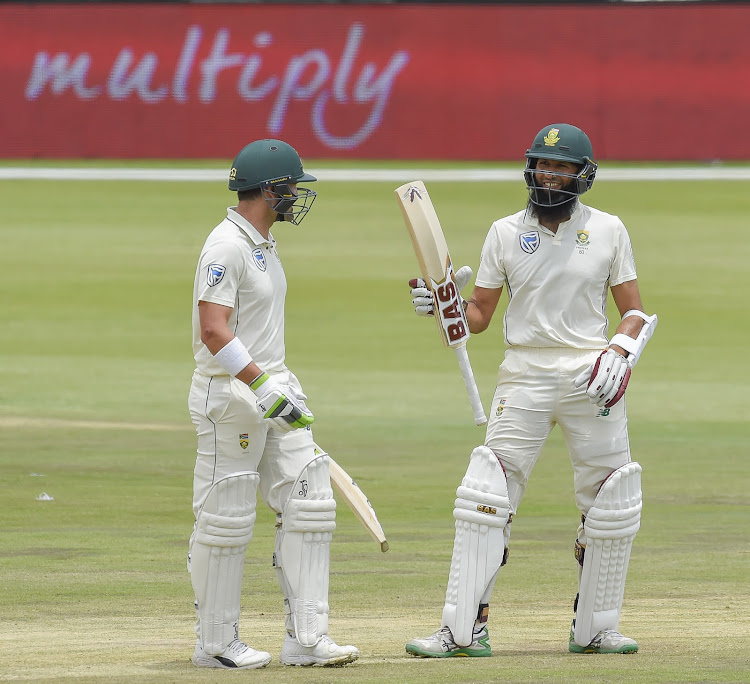 Hashim Amla of South Africa is congratulated by Dean Elgar of South Africa on getting his fifty runs during day 3 of the 2018/19 Castle Lager Test Series match between South Africa and Pakistan at SuperSport Park, Centurion on 28 December 2018.
Image: Chrsitiaan Kotze/BackpagePix

South Africa claimed a comprehensive six wickets victory over Pakistan in a Boxing Day Test that lasted only three days in Centurion on Friday to take a 1-0 lead in this three match series.

The Proteas came into the third and final day needing 149 runs and they crossed the finish line before tea on 151/4 after 50.4 overs‚ even though they almost made a mess of things with the loss of three quick wickets towards the end.

When the winning runs was scored‚ half centurion Hashim Amla and Temba Bavuma were on unbeaten scores of 63 and 13 respectively.

South Africa lost Aiden Markram (0)‚ half centurion Elgar (50)‚ Theunis de Bruyn (10)‚ whose wicket is the only one of the 34 to fall to spin‚ and captain Faf du Plessis who failed to score in his two innings.

Before Elgar departed‚ he shared a partnership of 119 with Amla and it is the highest of the match.

This was an important team victory for the Proteas but there were a number of players who achieved significant personal milestones.

Fast bowler Duanne Olivier‚ who returned with highly impressive match figures of 11/96‚ has handed the selectors a selection headache for the second Test in Cape Town next week as he only played in this match due to the unavailability Vernon Philander who is fit again.

Dale Steyn became South Africa’s most successful Test bowler when he claimed his 422nd wicket in the first innings when he removed Fakhar Zaman to overtake former captain Shaun Pollock.

Steyn went on to claim two more wickets in the second innings and he will once again be a threat to the Pakistani batsmen who are low on confidence.

Bavuma also underlined his importance to the Proteas’ middle order as a gallant and patient half century in the first innings to help his team to a total of 223.

Then‚ there was the return to form of premier batsman Hashim Amla who scored his first half century in eleven innings on Friday. He sparkled with eleven boundaries and also clocked 1000 Test runs against Pakistan.

Kagiso Rabada was another shining light for the Proteas and he ended this Test match as the leading wicket-taker in a calendar year with 52 wickets after ten matches following his match figures 6/106.

There were a number of positives in this low-scoring Test match where 745 runs were scored and 34 wickets fell.

But coach Ottis Gibson will be slightly concerned with the poor form of opener Aiden Markram and captain Du Plessis.

For the Pakistanis‚ whose board on Friday morning released a statement disputing reports of a dressing room burst up between some players and coach Mickey Arthur‚ they have a lot o  improving to do in all departments.

Their shining lights with the bat were Babar Azam‚ 71 in the first innings‚  and Shan Masood and Imam-ul-Haq‚ who scored 65 and 57 respectively in the second innings.

But their captain Sarfraz Ahmed is yet to get off the mark after two golden ducks.

Pakistan only managed to take fourteen wickets in this match with Shaheen Afridi and Mohammed Amir claiming four each.