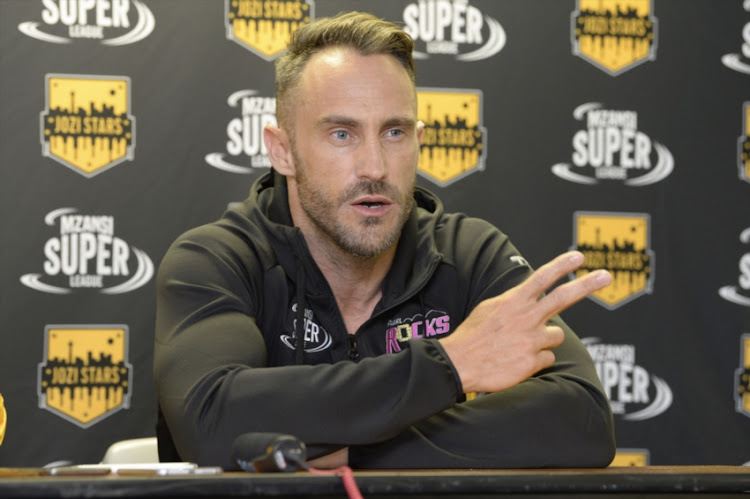 Proteas Test captain Faf du Plessis put on his national team cap in the aftermath of the rained-out Mzansi Super League eliminator and said a tight readiness rope will have to be walked ahead of the Pakistan Test series.

The Proteas will have their first red-ball engagement on Boxing Day at SuperSport Park some five months since they travelled to Sri Lanka for a two-Test series they lost in July.

While some players have played county and Four-Day Franchise Series cricket‚ the diet of MSL cricket has changed their outlook.

Fortunately for Du Plessis‚ there's a round of four-day cricket that starts on Wednesday while a South African Invitational XI faces the Pakistanis during the same time.

Du Plessis is concerned about the player's mental freshness even though he said the MSL is an important part of the schedule.

“It's a bumper schedule for us and that's the tricky part of this period.

"The plan would be that the guys who made the final will probably get a rest in the four-day game and the guys who don't to play some four-day cricket for their domestic teams.

"There's been a lot of cricket played‚ so you want your guys to be fresh but we also haven't played a lot of red-ball cricket recently‚” Du Plessis said.

“The games start on Wednesday and they finish on December 22 and on the next day‚ that's when the Proteas assemble and that's three days before the start of the Test.

"I would've liked to see the guys get a bit more rest and get their batteries recharged because it's a very hectic season for the Proteas.

"But there's pros and cons.

"The league is important and some players will be needed. There's a lot of things going on behind the scenes to ensure the players will be ready for the Tests and also being mentally fresh.”

Du Plessis though said the MSL has opened his eyes in regards with the talent pool that is available in South Africa's domestic cricket circle.

Du Plessis said the tournament allowed him to watch a lot more domestic cricket than he normally does and answered a few lingering questions he had about some players who may have forced their way into the selection radar.

“I've really enjoyed the side the tournament has given me in terms of looking at players. The downside of being on the road all the time is that you only see the players you're travelling with.

"Being captain‚ I felt I needed to watch a lot of cricket because I needed to understand what the different domestic (sides) are doing‚” Du Plessis said.

"There's a lot of players who have impressed me. Someone like Duanne Olivier has bowled very well and he's someone I would have thought in the past would have been a red-ball cricketer.

"It's the same with Anrich Nortje but it's unfortunate that he's injured‚ especially with the fact that there's some injuries in the national team. South African cricket will benefit as a whole.”