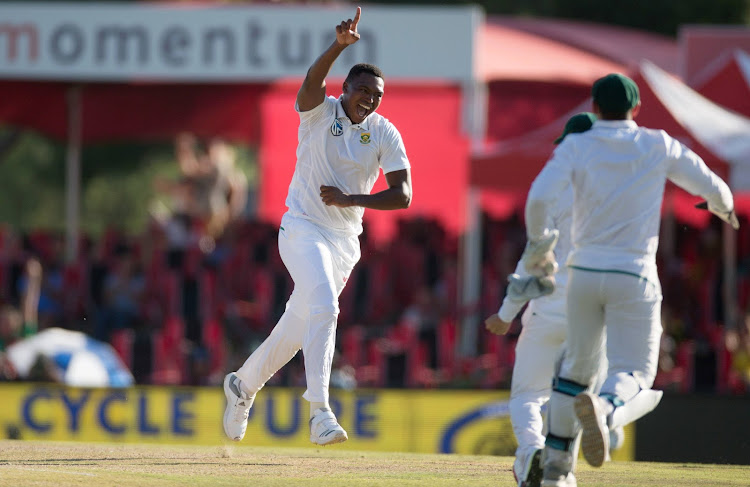 At the moment there is little that emerging South African fast bowler Lungisani ‘Lungi’ Ngidi can do wrong‚ but try telling that to his mother Bongi.

Over the last three months‚ Ngidi‚ who celebrates his 22nd birthday on Thursday‚ announced himself to the cricketing world by taking seven wickets on Proteas Test debut in the 135-run win over India at SuperSport Park where he earned the man-of-the-match award.

That does not stop Bongi‚ who lives with her husband Jerome hundreds of kilometres away from their son in Kloof‚ a suburb west of Durban‚ from carries out her maternal duties with diligence. Recently called Ngidi to order after he posted an ‘inappropriate’ picture as his Whatsapp status.

“I have always listened to my parents who always told me to never get ahead of myself‚ to stay grounded and remain humble‚” he said this week during at Titans’ end-of-season awards where national ODI team-mate Farhaan Behardien was named the player of the season.

“I am the person that my parents raised me to be and they always make sure that they keep me in line. Even if I post a Whatsapp status with a funny picture that contains swearing or anything that they view as inappropriate‚ they always make their feelings known and remind me that this is not the way they raised me.

“My mother always puts me back in line. The worst thing for me would be to disappoint my parents‚ and that is not what I want. The best thing is to keep my focus and keep on working on my game.”

Reflecting on his highly impressive start to international cricket where he has already claimed 14 wickets in three tests‚ eight in four ODIs and six in three T20s‚ Ngidi said his life has changed almost beyond recognition.

“My life has changed in amazing ways. I am exposed to things that I never thought I would be exposed to and I have just received a national contract now.

“It is a dream come true and I am happy that now I can help my parents so that they will never have to worry about anything.

“It has been a whirlwind journey where everything just kept on happening. Every time I thought it would slow down‚ something popped.

“If you look at where I came from to where I am now‚ it has been nothing short of amazing and things have happened very quickly.”

After the current series against Australia the Proteas have a three-month break before travelling to Sri Lanka in August‚ are welcomed by Zimbabwe in October‚ travel to Australia in October and November and host Pakistan in the summer.

“There are a lot of international tours coming up here later in the year and I would like to be part of all those‚” Ngidi said.

“I want to be involved in every game but I have the IPL (Indian Premier League) coming up now in April‚ which I will be using to get used to subcontinent conditions.

“I was not expecting to be sold in the IPL auction – we always put our names hoping for the best and it was the last thing that I expected.

“There is also the ODI World Cup next year and we don’t know what the makeup of the team is going to be. We all want to be there and I will just be working hard to make sure that things works out.

“I am in better shape than I was against India‚ I am feeling great‚ I am in good rhythm and I am confident with my bowling.”

Things are promising for the birthday boy but whatever happens in the coming months‚ Ma Ngidi will be watching him like a hawk.