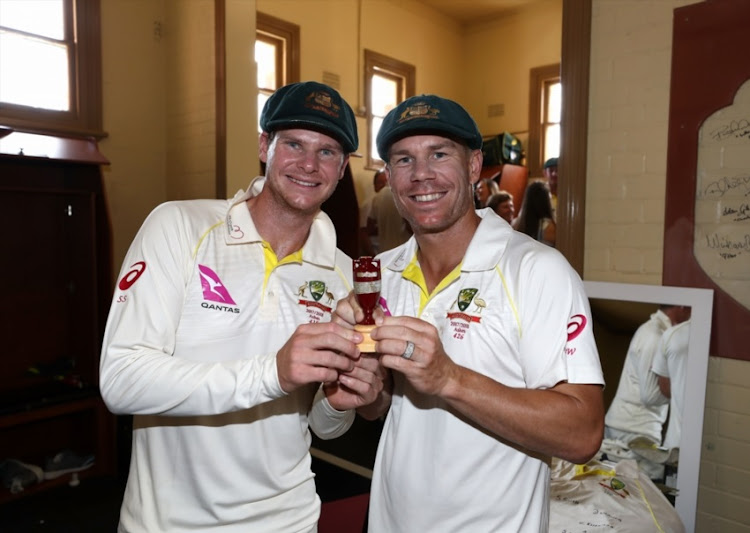 Steve Smith and David Warner of Australia celebrate with the Ashes Urn in the change rooms during day five of the Fifth Test match in the 2017/18 Ashes Series between Australia and England at Sydney Cricket Ground on January 8, 2018 in Sydney, Australia.
Image: Ryan Pierse/Getty Images

Australia’s ball-tampering cheats that are former captain Steven Smith and David Warner will have a year to think about why they decided to illegally alter the condition of the ball in Cape Town.

Australian cricket website cricket.com.au reported this morning that the New South Wales duo have been banned from the game for a year while Western Australian opener and current test rookie Cameron Bancroft has been banned for nine months.

According to Cricket Australia’s chief executive officer‚ James Sutherland‚ the trio were the only ones in the playing group that had prior knowledge of the connivance to cheat in the third test that took place at Newlands in Cape Town.

Australian national team coach Darren Lehmann was exonerated from the incident and will continue to coach the side until the end of his contract at the end of next year.

While cricket.com.au also reported that CA had yet to confirm the findings on the back of an investigation led by CA’s integrity officer Iain Roy‚ Sutherland will be addressing the media in Sandton‚ Johannesburg later on Wednesday.

Smith‚ Warner and Bancroft were found to have breached article 2.3.5 of the CA Code of Conduct‚ which relates to conduct at any time that is contrary to the spirit of the game‚ unbecoming of a representative‚ harmful to the interests of the game‚ or bringing the game into disrepute.

Smith was already banned by the International Cricket Council for the fourth test at the Wanderers for his role in the ball-tampering mess while Bancroft was fined 75 percent of his match fee.

Scuffles broke out between media and police on March 28 2018 as Australia's former cricket captain Steve Smith made his way out of South Africa. Smith was suspended following a ball-tampering scan...