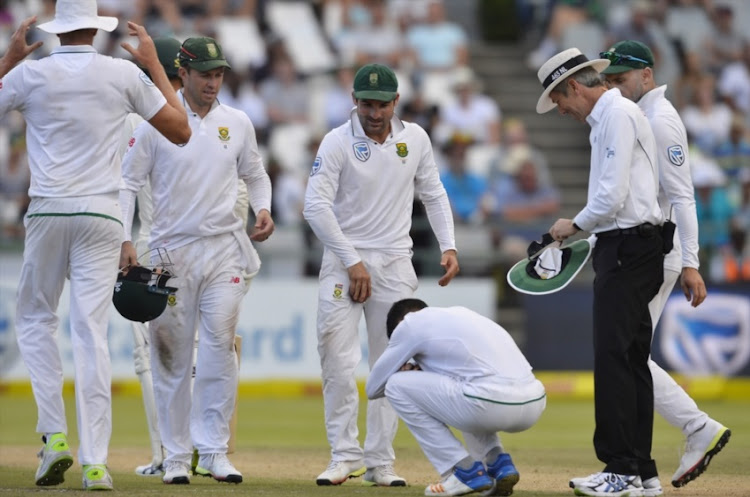 Morne Morkel’s march to 300 wickets at Newlands on Friday was marred by more of the controversy that has dogged Australia’s tour of South Africa, this time involving spectators.

When Shaun Marsh flayed at a delivery wide outside his off-stump and was caught behind before tea on the second day of the third test, Morkel became the fifth bowler to claim 300 test scalps for South Africa.

That put Morkel into a club whose other members are Shaun Pollock, Dale Steyn, Makhaya Ntini and Allan Donald.

But Tim Paine and Nathan Lyon fought back with a stand of 66, and when bad light forced stumps 10 overs early Australia were 245/9 — 66 runs behind South Africa’s first innings of 311.

Dean Elgar and Kagiso Rabada resumed on 266/8 and took their partnership to 50 before Rabada edged off-spinner Lyon to slip to go for 22.

Those two catches, both claimed by Steve Smith, earned Australia’s captain a share of the record for the most grabs made by a player other than the wicketkeeper in a test innings.

Smith is the 11th player to take five catches in an innings.

Elgar scored an undefeated 141, his 11th test century, in more than seven hours at the crease in which he faced 284 balls and hit 20 fours and a six.

That made him the only other player in test history after West Indian Desmond Haynes to carry his bat three times.

In the sixth over of Australia’s reply Rabada, who had to win an appeal against a ban he earned during the second test at St George’s Park to be able to play at Newlands, uprooted David Warner’s off stump.

Warner’s punchy 30 came off 14 balls and featured five fours and a six.

There was more aggression to follow from the other side of the fence as Warner walked back to the dressingroom.

A spectator in the Western Province Cricket Club members’ enclosure, which borders the stairs to the dressingroom, launched what looked like a sustained verbal barrage at the Australian.

Security staff were on the scene and figures in Australia team tracksuits rushed out of the dressingroom and down the stairs towards Warner — who first hesitated but then continued up the stairs as the man continued to, it appeared, assail him.

The episode echoed former Australia fast bowler Merv Hughes’ altercation with a spectator as he walked up the ramp to the dressingroom at the Wanderers in March 1994. The incident led to the walkway being covered with a plexiglass tunnel.

Ground officials confirmed the spectator involved in Friday’s encounter was evicted from the ground, as were other fans in the Railway Stand for singing songs that mentioned Warner’s wife.

Warner was fined and docked three demerit points for the tirade he launched at Quinton de Kock during the first test at Kingsmead — also on the stairs leading to the dressingroom.

Five overs after Warner went, Morkel had a pulling Usman Khawaja caught at fine leg for five with his third delivery.

The tall fast bowler moved to 299 wickets in the third over after lunch, when Steve Smith sent a catch looping to gully.

Morkel’s removal of Marsh ended a stand of 78 he shared with opener Cameron Bancroft, the biggest of the innings.

Before another run had been added Vernon Philander trapped Bancroft in front for 77 with what became the last ball before tea.

Philander struck once more after tea to have Mitchell Marsh caught behind, and Rabada had Pat Cummins and Mitchell Starc both taken at third slip by AB de Villiers.

Philander left the field after he suffered what team management said was whiplash when diving at mid-on to try and take a catch Lyon offered off Morkel. He returned 10 overs later.

Lyon was dropped on 12 by Hashim Amla at first slip off Rabada, and on 32 by De Villiers at third slip off Morkel.

The South Africans finally ride themselves of Lyon when he skied Morkel to deep point, where Elgar ran hard to take a fine catch.