Coetzee’s fate to be decided on Boks’ daunting tour in Europe? 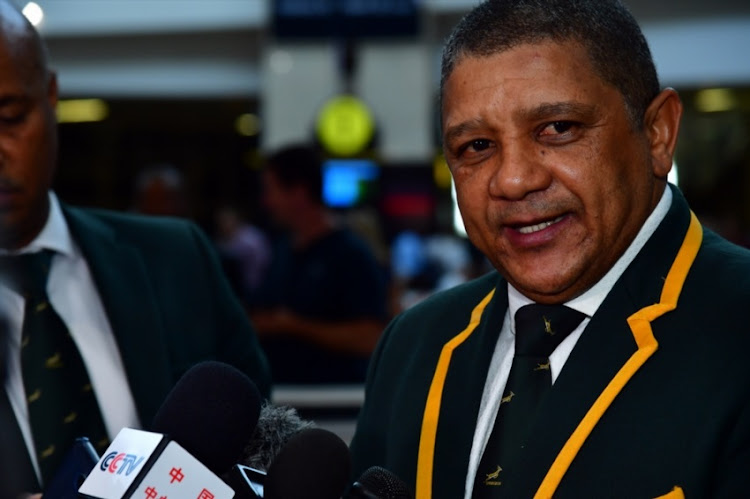 Three of the Springboks’ four opponents on their imminent tour to Ireland‚ Europe and Britain inflicted defeats on the tourists the last time they played in the northern hemisphere‚ underlining how difficult the programme will be.

Losing to Ireland in 2014 and Wales in both 2014 and 2016 as well as an infamous defeat against Italy last year indicates that the Boks are in for a tough tour that could yet heap huge pressure on coach Allister Coetzee.

After losing 20-18 to Italy in Florence last November‚ which was sandwiched between defeats against England and Wales‚ Coetzee somehow retained his job despite a 33% winning ratio in his first season in charge.

Things have improved slightly in 2017 in terms of defeats with the Boks only losing two matches – both against the All Blacks – this season. But they still finished third in the Rugby Championship due to two draws against Australia and this tour could decide Coetzee’s long-term survival.

SA Rugby won’t put a number on what a successful return for Coetzee would be although in the aftermath of the Italy loss last year‚ president Mark Alexander said the union had set a 75% winning target.

So far this season the Boks have only won 55% of their matches and even by winning all four tour matches‚ Coetzee’s team cannot reach that target.

But four wins would show that the Boks’ curve is on the up. Anything less would leave the team no further along than they were last year and it would also leave the SA Rugby hierarchy with a tough decision about whether to stick with Coetzee‚ or cut their losses fewer than two years before RWC 2019.

A performance review of the season would look more deeply than results‚ although that is the only real measure of success at the cutting edge of international rugby. Style of play and transformation targets are secondary measures to wins and losses‚ but they and several other key performance indicators‚ will be considered.

But that assessment will wait for another day and right now the Boks have to focus on the job at hand‚ which starts against Ireland next Saturday‚ November 11.

Ireland have only recently dropped to fourth on the world rankings but are still a formidable team – especially at Lansdowne Road.

In 2014‚ the last time the sides met in Dublin‚ Ireland ran out 29-15 winners. It was Ireland’s second-biggest win over the Boks and their fourth in seven matches in Dublin this century.

That was against a Bok team that enjoyed an unprecedented two-week camp before the tour‚ which started a few days after they beat the All Blacks for the only time under previous coach Heyneke Meyer.

There are similarities this year. The Boks took the All Blacks to the edge before losing a thrilling match 25-24 in Cape Town and have also enjoyed a long buildup to the tour.

To add spice to the occasion‚ SA appears to have beaten Ireland in the race to host Rugby World Cup 2023 after a technical committee scored SA’s bid higher than that of the Irish and France.

The Irish bid committee has not quietly accepted the result and there is a feeling of injustice in Ireland if the tone of some media reports and fan reaction is anything to go by.

Maybe the players won’t use the perceived World Rugby slight as a motivational tool‚ but the 60 000 at Lansdowne most certainly will use it to fuel their support of the emerald greens.

After Ireland it’s on to Paris to take on Les Blues at the Stade de France. After beating a weak and tired France 3-0 during a June home series the Boks should go into the match with confidence‚ although a setback against Ireland will heap pressure on the coach and players.

In 2013‚ the last time the sides met in Paris‚ the Boks won 19-10‚ ending a four-match losing streak in France‚ thanks to a massive effort from the pack with prop Coenie Oosthuizen announcing his arrival as a world-class tighthead. The big man‚ barring injury‚ will have another huge role to play this time around.

Italy are next up in Padua‚ the scene of a 22-6 Bok win in 2014. But last year the Boks were stunned in Florence against an Azzuri that took advantage of an SA team that had all but imploded.

On paper the Boks of 2017 should be too good for Italy this time around. But if they have lost their first two games on tour‚ the Italian nightmare of 12 months ago could repeat itself.

The final Test of the season against Wales in Cardiff falls outside World Rugby’s prescribed Test window meaning the Boks will be without the likes of Francois Louw‚ Elton Jantjies and Franco Mostert.