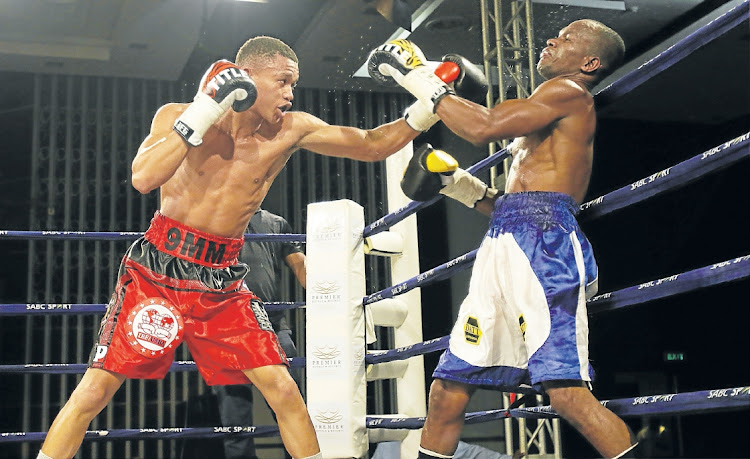 For someone blessed with massive boxing talent, it is hard to believe that Ludumo “9mm” Lamati does not have a world title to his name, despite being a professional boxer since 2014 and yet to lose any of his 18 fights.

But that is something he is hoping to change when he takes on Mexico's Jose Martin Estrada Garcia in an IBO junior-featherweight championship on June 19.

“I have been waiting to win a world title for a very long time and this guy is on my way towards achieving that. I must take him aside. It’s going to be war,” warned Lamati who, at 29, faces a race against time.

Some boxers like Hekkie Budler were already world champions after 18 fights, yet they are no match for Lamati in terms of talent.

The fighter from Mdantsane has picked up the SA and two regional titles – the ABU and the IBF Intercontinental junior-featherweight belts – which have added nothing to his growth as a fighter.

The fight against Garcia will be the main attraction in Golden Gloves' tournament at Emperors Palace.

Lamati should, if judged on the quality of his opponents, emerge victorious. The fight will be Garcia’s first outside Mexico, where he was won 12 of 14 fights. Notable names he has fought are Samuel Gutierrez, Gonzales Garcia and Luis Lebron, who Garcia defeated on points for the WBO Latino titles two years ago.

The champion last fought two years ago when he stopped Brandon Azael Romero in five rounds for his sixth short-route victory.

The boxer, who is trained in Johannesburg by former SA champ Phumzile Matyhila and managed by former world champion Brian Mitchell, outpointed Said Mohammed Hassan from Tanzania over eight rounds at Emperors Palace on March 14.

Dubbed “Generation Next” by promoter Rodney Berman, the tournament on June 19 will feature what promises to be an enthralling local shoot-out between national and ABU welterweight title-holder Thulani “Evolution” Mbenge and WBA Pan African champion Jabulani Makhense in a winner-takes-all contest. WBA Pan African cruiserweight champion Johnny “The Hurricane” Muller will defend against Akani “Prime” Phuzi in a rematch of their December fight, when Muller dethroned Phuzi.