Fans treated to thrilling bouts at the racecourse 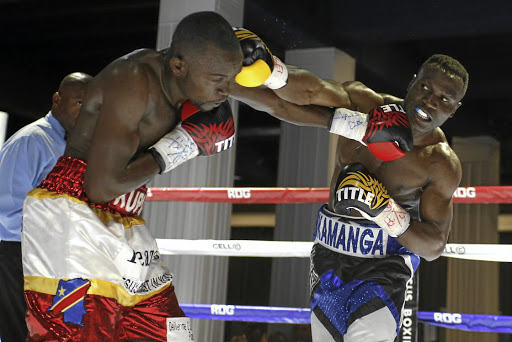 Raymond Kupula against Clement Kamanga in their bout at Turffontein Racecourse,Johannesburg, on Sunday.
Image: CHRISTO SMITH

Turffontein Racecourse rocked to the sound of leather-encased fists at the weekend.

The home of horse racing in the south of Johannesburg staged a well-attended nine-bout card on Sunday, jointly staged by Unleashed Combat Sport and BRD promotions.

Female promoters Shereen Hunter and Sonja Fernandes - the wives of respected boxing trainers Lionel Hunter and Manny Fernandes - had prepared 50 rounds of a boxing feast which turned out to be a nice family outing.

The bouts were so evenly matched that it was excitement from start to finish. Two of the four-rounders went the full scheduled distances, while the others ended via short routes.

The other four-rounders decided by the judges were between Siphamandla Mkhambaphi from the Eastern Cape and Gift Baname from Botswana, and between Siya Mabena and Jules Batale.

Mkhambaphi outpointed Baname, while Mabena and Batale from Congo shared the spoils.

Fans were on the edge of their seats throughout an eight-round international junior welterweight shoot-out between Clement Kamanga and Raymond Kupula.

Kamanga's mental toughness earned him a majority points decision. He bettered his record to seven wins against a loss, while Kupula suffered his eighth loss against seven wins and a draw.

Their clash which topped the bill was aptly voted the best bout of the afternoon and both boxers earned themselves an extra R5000 each to their purses.

Walter Dlamini and Dido Mukanya also gave a good account of themselves in their six-rounder in the middleweight division.