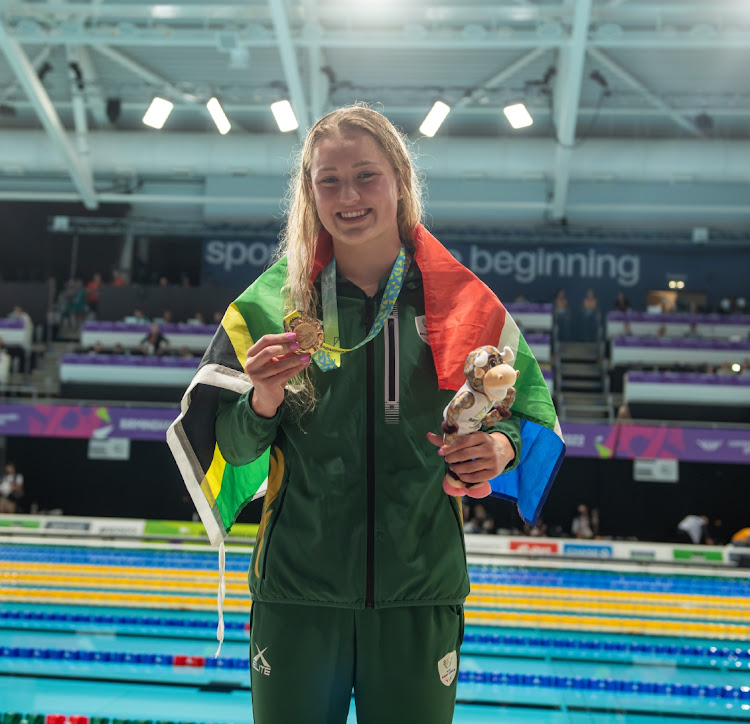 Lara van Niekerk of South Africa winning a gold medal in the Women’s 50m Breaststroke during during the Swimming event on day 2 of the 2022 Commonwealth Games at Sandwell Aquatics Centre on July 30, 2022 in Birmingham, England.
Image: Anton Geyser/Gallo Images

Team SA’s campaign at the Commonwealth Games in Birmingham, England, seems to be picking up as  medals have started rolling in.

After a rather slow start for Team SA, things started to turn around at the Sandwell Aquatics Centre on Saturday evening.

Van Niekerk, who has been in blistering form this season, set the Commonwealth Games on fire on her way to winning the Women’s 50m breaststroke gold. She swam a new games record of 29.82sec in the morning heats and then smashed it in the semifinal as she won in 29.80sec.

In the final, where she was flanked by fellow South Africans Tatjana Schoenmaker and Kaylene Corbett, she showcased her sprinting ability as she came out on top in another record time of 29.73 sec.

“It felt amazing, the crowd was going wild, so I knew it was going to be close. But I was just happy that I could swim the second fastest time I’ve ever done, and to win a medal is a bonus, so I’m super happy. I just want to go and enjoy it. The pressure is off now, so I’m just going to have fun and do my best,”  said Van Niekerk.

“It was a bit closer than I expected. I was expecting to go a bit faster than the semi, but my coach told me it’s not about times at all, it’s just about getting the win. It’s my first international medal and it’s amazing to get a gold,” Coetzé.

Team SA would have added more medals overnight to their tally. The duo of Schoenmaker and Corbett would have got podium finishes in the women’s 200m breaststroke final. Meanwhile, the men’s Seven Rugby team were scheduled to play in the final match against Fiji on Sunday night.