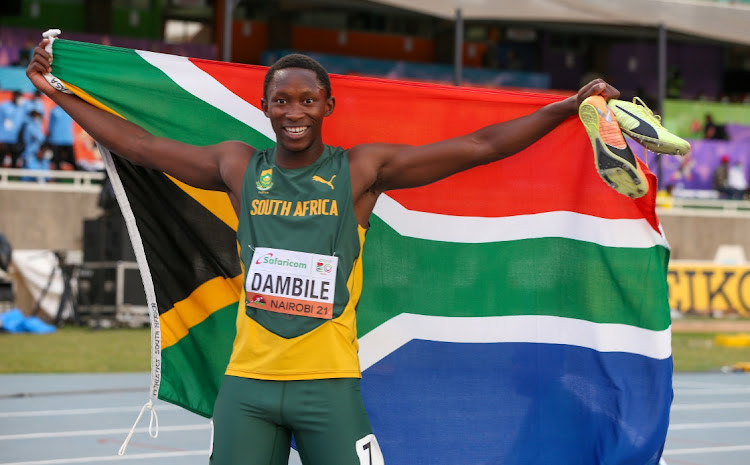 Sinesipho Dambile of South Africa hold up his national flag after winning the bronze medal in the mens 200m final during day 4 of the 2021 World Athletics U20 Championships at Kasarani International Stadium on August 21, 2021 in Nairobi, Kenya.
Image: Roger Sedres

Teenage sprint sensation Sinesipho Dambile has dedicated his haul of two medals at the World Athletics Under-20 Championship in Nairobi, Kenya, to his late friend Mbasa Jubisa.

Jubisa, who trained with Olympic record holder Wayde van Niekerk, died last year in a bus accident without fulfilling his dream of representing the country at the junior world championships.

“I am still surprised by my achievements. I did not think that I would run like that. I struggled with a hamstring injury, and my body could not take it. God is alive. I went in with the mind and took it like that,” said Dambile.

The youngster from Dimbaza in Eastern Cape said he was determined to make the podium for his best friend as a way of paying tribute to him.

“The bronze is for my late best friend (Jubisa). His goal was to be at the world championships. He was training with Wayde and he was looking forward to going to Kenya with me. May his soul rest in peace,” Dambile told Sowetan yesterday.

He ran a season-best of 20.48 seconds in the 200m final to win his first international individual medal.

He said shattering the world record in the 4x100m final with teammates Mihlali Xhotyeni, Letlhogonolo Moleyane and Benjamin Richardson was the highlight of his athletics career.

Dambile, who completed his matric at the Tuks Sports High School in 2019, took a gap year to focus on his running career. However, he is planning to further his studies next year.

His role model is SA 100m record holder Akani Simbine. “Having a conversation with him motivates me. He understands me, and I ask him how he does it whenever I see him.”

Ethiopian runner Tadu Nare of the Nedbank Running Club took advantage of the absence of the race favourites to win the first race of the Spar Women's ...
Sport
8 months ago

Caster Semenya is SA’s most popular sportswoman, based on a study of Google search data commissioned by a British health club chain.
Sport
9 months ago
Next Article