Swimming star says she didn't expect her success in Tokyo 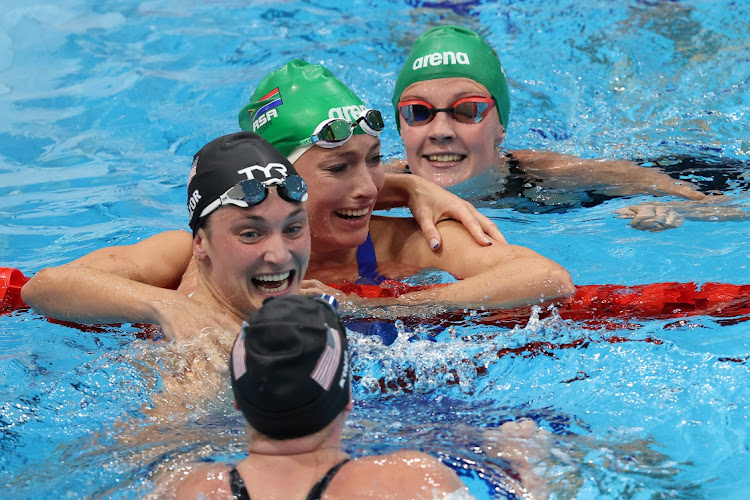 Tatjana Schoenmaker scooped SA’s first gold medal of the Tokyo Games as she won the women’s 200m breaststroke in a world record on Friday morning.

Schoenmaker screamed with delight when she caught sight of her 2min 18.95sec mark, the first individual world record of this gala. Then she wept with joy as she was congratulated by the American silver and bronze medallists, Lilly King and Annie Lazor, and her fifth-placed Tuks teammate Kaylene Corbett.

King, in lane two, attacked the race early on and had the lead at the halfway mark, but Schoenmaker remained steadfast in executing her strategy, reeling in the American on the third lap and then pushing for the win and dipping under 2:19.00 for the first time in history.

The 24-year-old South African smashed the 2:19.11 world record held by Denmark’s Rikke Moller Pedersen since 2013. Not bad for a swimmer who missed qualifying for the 2016 Rio Olympics by one-hundredth of a second.

Corbett, fourth-quickest in the heats and semifinals, was fifth in a 2:22.06 personal best.

Schoenmaker, who took the Olympic 100m breaststroke silver on Tuesday, couldn’t believe she had won, saying her goal going into the showpiece was simply to swim her best.

“If I could just make the final, that was what I said since I started coming, to make the final is already an amazing achievement,” she said, adding it was a bonus to have Corbett in the line-up with her.

“I was lucky to have my teammate there. We were all two too — two Americans, two British, two South Africans [in the final]  — so it was just amazing to have that teammate there.”

Schoenmaker and Corbett are only the third pair of SA swimmers to have made the same Olympic final after Roland Schoeman and Ryk Neethling in the 100m freestyle at Athens 2004 and Penny Heyns and Sarah Poewe at Sydney 2000.

Schoeman and Heyns made the podium, taking silver and third, while Neethling and Poewe were fourth.

Schoenmaker was the top seed in the 200m breaststroke going into Tokyo, but she said she hadn’t expected to win a medal.

“I would never have even thought — this is my first Olympics — so for me to get a lane into the final, then everyone stands a chance. That’s the thing I’ve always believed in.

“So I’ve exceeded, or God has exceeded, all my expectations, so I couldn’t be happier.”

Schoenmaker also praised compatriot Heyns, who won the breaststroke double at Atlanta 1996, for encouraging her along the way. “I haven’t achieved so much yet,” she added.

Schoenmaker is only the 10th South African to have won multiple medals at a single Games, and the fourth since readmission, after Heyns, Schoeman (Athens 2004) and Chad le Clos (London 2012 and Rio 2016).