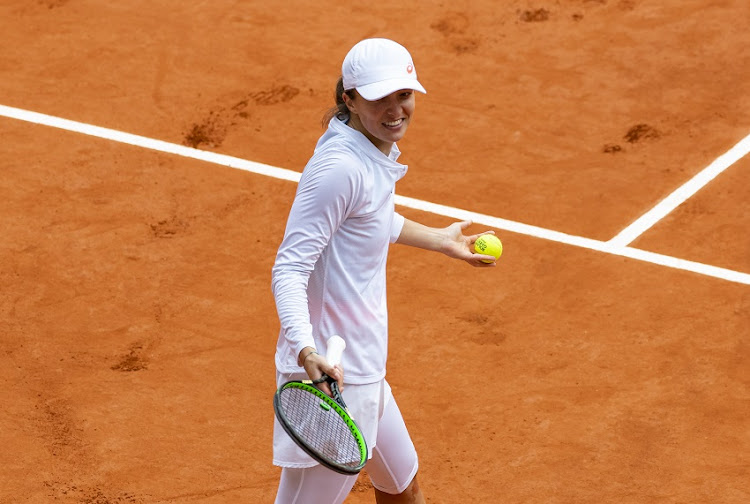 Iga Swiatek of Poland celebrates her victory over Nadia Podoroska of Argentina in the semi-finals of the women’s singles at Roland Garros on October 08, 2020 in Paris, France.
Image: GETTY IMAGES

Recent history in women's Grand Slam finals suggest that Iga Swiatek's lack of experience might not be a problem when she takes on Sofia Kenin in the French Open final, yet Roland Garros can be tough on the youngsters.

Australian Ashleigh Barty, however, hammered teenager Marketa Vondrousova in last year's French Open final and if the average age of the women's champions at Roland Garros is the lowest of all four Grand Slams - 23.7 to 23.8 for the U.S Open, 24 for the Australian Open, 25.3 for Wimbledon, the claycourt tournament is also known for a couple of teenagers' meltdowns.

While Swiatek bulldozed through the draw, losing only 23 games en route to the final, she does not have fourth seed Kenin's experience. The American, although only 21, already has a Grand Slam title to her name having won this year's Australian Open.

"I've already done it in Australia. I've had tough matches these past two weeks and I'm so excited to be in the final," said Kenin.

Swiatek, the first Pole in the final in 81 years, has yet to be really tested.

In 1988, the 17-year-old Natasha Zvereva, who had reached the final losing only one set and having beaten Martina Navratilova in the last 16, collapsed in a 6-0 6-0, 34-minute humiliation at the hands of Steffi Graf.

The West German was about to turn 19 but she had already two major titles under her belt.

Eleven years later, a teenage Martina Hingis blazed through the draw before wilting under pressure against the experienced Graf, losing her nerve in the face of an adverse crowd.

Apart from experience, Swiatek has it all as she bids to become the youngest player to lift the Suzanne Lenglen Cup since Monica Seles beat Graff in the 1992 final.

"I haven't seen one player who is complete technically with all the shots. I haven’t seen a player as young as her as complete when it comes to constructing points and going forwards, taking the ball early," triple French Open champion Mats Wilander told Eurosport.

"Even though she hits the ball with so much power, she also hits with margin. She doesn’t have any weakness at all, not one."

Swiatek beat Kenin in the 2016 juniors tournament but both players have never faced each other at WTA-level.

The world number 54 hinted that nerves would be a key factor on court Philippe Chatrier on Saturday.

"Usually, I'm that kind of player who is playing better under pressure. If I'm not going to choke up, I think everything will be fine," she said.

Whether her fate will be similar to Zvereva's or Seles's is anyone's guess.