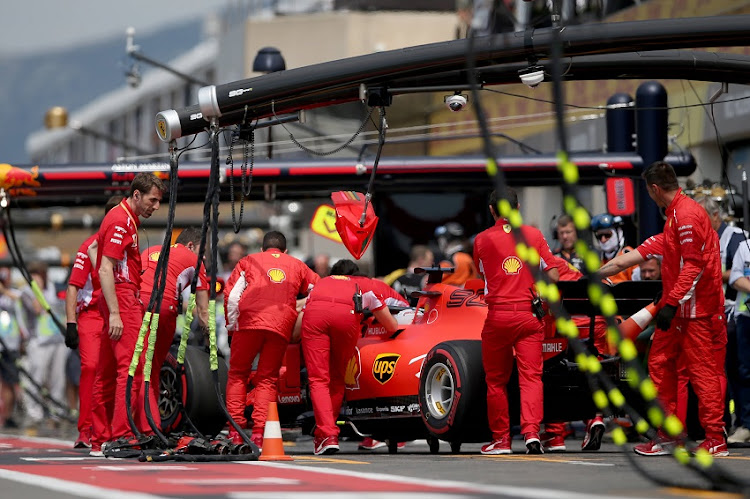 Sebastian Vettel of Germany driving the (5) Scuderia Ferrari SF90 stops in the Pitlane during practice for the F1 Grand Prix of France at Circuit Paul Ricard on June 21, 2019 in Le Castellet, France.
Image: Charles Coates/Getty Images

Ferrari have poured cold water on speculation they have discovered an aerodynamic mapping error that has cost them precious lap time in the battle with Formula One champions Mercedes.

The sport’s oldest and most successful team looked as if they were a step ahead in pre-season testing but Mercedes have won all seven races so far, including one-two finishes in the first five.

Motorsport magazine reported speculation an ‘aero glitch’, a discrepancy between the wind tunnel and track data, had cost Ferrari 0.3 seconds a lap.

“I heard or at least I read that point,” Ferrari principal Mattia Binotto told reporters at the French Grand Prix. “It’s not true at all. We do not have correlation issues.

“I would say even unfortunately, because if that would have been the case maybe we would have solved part of the performance,” he added.

“But it’s not a correlation issue.” Ferrari’s Sebastian Vettel is 62 points adrift of Mercedes’ five-times world champion Lewis Hamilton, who has won five of the seven races.

Vettel has not won in 15 races now, with Ferrari’s most recent victory coming from now-departed Kimi Raikkonen in Texas last October.

Ferrari tested a number of new parts in Friday practice and Binotto said some would stay on the car for the rest of the weekend.

He said Ferrari were doing well in the first two sectors of Le Castellet’s Paul Ricard circuit but ‘suffering on the last one’.

“Very similar behaviour compared to Barcelona,” he said. “I would say not even unexpected because that’s the car we’ve got at the moment.”

Ferrari have new front and rear wings for the French Grand Prix as well as revised sidepods.