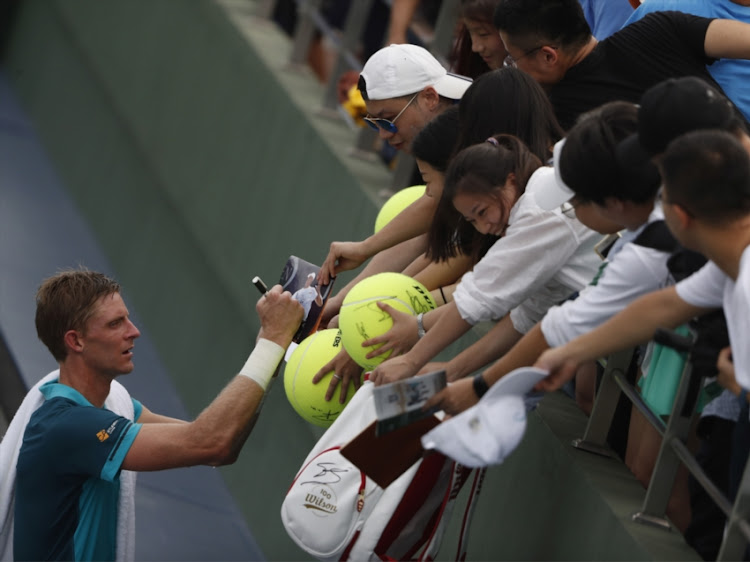 Kevin Anderson of South Africa signs autographs for his fans after the match against Adrian Mannarino of France in Round 1 of Men's Single on Day 3 of 2017 ATP Shanghai Rolex Masters at Qizhong Stadium on October 10, 2017 in Shanghai, China.
Image: Kevin Lee/Getty Images

Cape Town – South Africa’s Kevin Anderson goes into the 2018 US Open with almost as much to lose‚ as he has to gain after a stellar 12 months that has seen him gatecrash the top five bracket on the rankings.

Anderson’s turnaround from world no 80 at the beginning of 2017‚ to a career high world No 5 going into the tournament started a little over 12 months ago on the US hard court season.

Anderson’s run to the US Open final at Flushing Meadows last year‚ where he lost to Rafa Nadal in the final‚ was the first of two Grand Slam final appearances out of the last four majors for the 32-years-old.

He backed up last year US final run with a final appearance at Wimbledon last month after ousting favourite Roger Federer in the quarterfinals and winning the longest ever Wimbledon semi-final against John Isner.

While that run will give him great confidence in New York this week‚ it also comes with pressure.

World ranking points have to be defended and anything less than another final appearance for Anderson will likely mean a rankings drop.

Anderson earned 1200 ranking points for his runners-up effort at the 2017 US Open and he has to ‘defend’ those points this week as they fall away after 12 months.

His stated goal is to finish the year in the top eight so that he can play at the season-ending ATP Tour finals in London (an unofficial world championship) in November.

Anderson plays his first round against American Ryan Harrison late on Monday night (SA time) and is one course to meet Nadal in the quarterfinals if both progress that far.

After a season that saw Anderson win the New York Open on the ATP Tour in February‚ his confidence levels are high at Flushing Meadows.

“Projecting forward to the US Open and next year‚ I just feel a little more comfortable saying‚ ‘I’m here to compete for the win‚’” Anderson said this week.

“I would have said it before‚ but now I can say it with more self-assurance.”

Anderson is most comfortable on hard courts‚ having grown up playing most of his tennis on them in Johannesburg.

As always the 2.03m giant will look to set the tone of his matches behind his missile-like serve‚ which is one of the best on tour.

Anderson is one of only five players this season to average more than one ace per service game throughout the year.

Unsurprisingly the massive serving Isner is top of the list with an average of 1.45 aces per service game. Anderson is fourth with 1.14 while Milos Raonic and Nick Kyrgios occupy positions two and three.

On return he has been effective too‚ winning 37% of 312 break point opportunities‚ which is part of the reason he is now among the game’s elite players.

In a rare turn of events‚ Anderson won’t be the only South African man in the singles draw after Lloyd Harris came through a grueling qualifying process to take his place in the field.

The 21-year-old Harris will face French Veteran Gilles Simon in the first round and win or lose will take home $50000 (R770000)‚ which will assist in keeping the world No 145 on tour for a little longer.