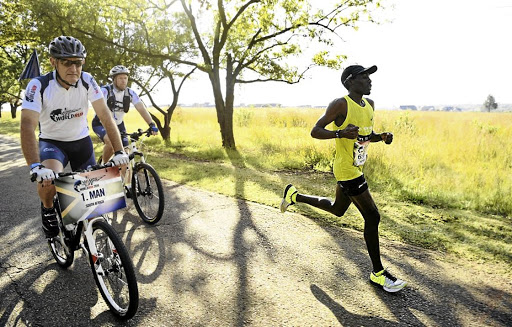 More than 100000 athletes from all over the world participated in this year's Wings for Life World Run, raising more than R17-million towards finding a cure for spinal cord injury.

The SA leg of the World Run, a race that encourages those who can to run for those who can't, took place at SuperSport Park in Tshwane on Sunday.

Despite the dry and hot conditions, more than 5000 runners took to the streets to do their part to raise funds for spinal cord injury research.

Racing alongside runners from more than 200 locations in 66 countries, Dominika Stelmach of Poland and Admire Muzopambwa of SA were crowned the South African champions of this year's World Run.

Muzopambwa managed to outrun the Catcher Car, driven by 5FM's Nick Hamman, for a total of 67kms, making him the South African male champion and 12th overall.

"I wanted to run as well as I could until the car caught me so I paced myself to get ahead. I have also always wanted to run for charity or for a good cause, so this win was great for me. I'm happy to have done it for those who can't," he said.

"This was my toughest race yet," said Stelmach after reaching 49.4kms before being overtaken by the Catcher Car. "The weather was brutal, it was really hot! I'm really happy to have won another country title and was afforded the opportunity to race in South Africa this year."

Stelmach finished fourth on the global leader board.

The overall champion was Aron Andersen from Sweden, a wheelchair-user athlete who raced 88.9kms in Florida, USA. - Sowetan Reporter