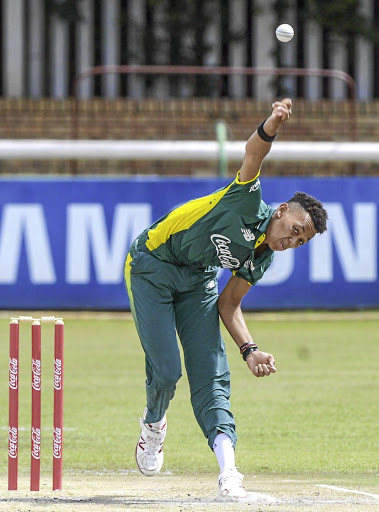 Thando Ntini during the SA U-19 Tri-Series final against England at Senwes Park in Potchefstroom at the weekend.
Image: SYDNEY SESHIBEDI

Cricket SA (CSA) yesterday announced the 15-strong South African U-19 squad for the ICC World Cup in New Zealand in the New Year.

Gauteng's Wandile Makwetu also cracked a nod for the second time and is the only player selected in the team with previous World Cup experience.

The wicket-keeper/batsman was a part of the Bangladesh tournament in 2016.

Allrounder Sean Williams has been left out of Zimbabwe’s squad for the four-day test against South Africa at St George’s Park this month.
Sport
4 years ago

The youngster has impressed selectors over the last 12 months and earned his spot to appear in youth cricket's biggest event.

The team will be captained by Free State's Raynard van Tonder. The World Cup, which is held every two years, will see 16 teams face off for a chance to claim the 2018 honours from January 13 to February 3.

"It's definitely one of the most exciting times in these kids' lives and careers.

"This is the culmination of the last 24 months' hard work and they have certainly put in the hours and effort to be named in this World Cup squad," said South Africa's coach Lawrence Mahatlane.