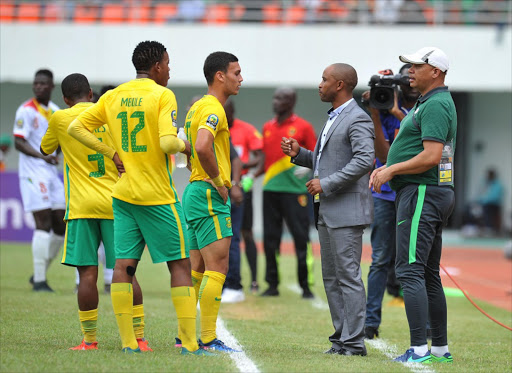 Liam Jordan put a much-changed Amajita side in front, but the lead was short-lived as Katlego Mohamme put the ball into his own net and Guinea grabbed a winner late on when Naby Bangoura converted a penalty. Picture credits: BackpagePix

South Africa took an early lead but had to settle for fourth place at the 2017 African Under-20 Championships after a 2-1 loss to Guinea in the bronze-medal match at the National Heroes Stadium in Lusaka on Sunday.

Liam Jordan put a much-changed Amajita side in front, but the lead was short-lived as Katlego Mohamme put the ball into his own net and Guinea grabbed a winner late on when Naby Bangoura converted a penalty.

Amajita coach Thabo Senong unsurprisingly made a number of changes to his side to give fringe players a run and a feel for the tournament.

This meant a first appearance for BidVest Wits goalkeeper Sanele Tshabalala, while a much-changed back-four saw Kaizer Chiefs youngster Siyabonga Ngezana partner captain Tercious Malepe at centre-back, with Mohamme and Aghmat Ceres in the fullback positions. Sipho Mbule, Kobamelo Kodisang and Jordan made up the front-three.

South Africa were ahead inside six minutes with a well-constructed goal as SuperSport United midfielder Mbule supplied a perfectly weighted through-ball for Jordan to convert his second goal of the tournament.

But that lead lasted only two minutes as Mbule’s clubmate Mohamme headed past Tshabalala for an own goal. Mohamme had not realised that Tshabalala had moved off his line and attempted to cushion a header back to his keeper, but succeeded only in beating his own man.

There were few clear-cut chances in the remainder of the first half, with the best for South Africa falling to Itumeleng Shopane, who was teed-up by Mohamme. His deflected shot almost wrong-footed the Guinea keeper, but was saved in the end.

It remained 1-1 to halftime and 10 minutes into the second period the diminutive Grant Margeman rose highest at the back post, but his header back into the dangerzone just eluded three players in a yellow shirt.

Mohamme’s poor afternoon continued when substitute Luther Singh found him at the back post from a free-kick, but with the goal gaping, the tall defender steered his shot wide.

Amajita received a slice of luck when Guinea forward Mohamed Coumbassa found himself one-on-one with Tshabalala, but as he tried to round the keeper, clattered into the Wits man on the edge of the box.

Tshabalala was fortunate that the referee did not even see a foul, let alone a red card.

And when Guinea did get a penalty on 85 minutes it was via an unfortunate bounce for skipper Malepe.

He tried to use his head to clear a bouncing ball in the box, but the poor Lusaka pitch saw the ball deviate onto his arm and Bangoura converted from the spot.

South Africa had a superb chance to equalise with virtually the last kick of the game as Singh's corner was headed over the bar from six-yards by Thendo Mukumela.

Amajita's journey to the semifinals of the continental championship has seen them qualify for the 2017 FIFA Under-20 World Cup to be staged in South Korea from May 20-June 11.