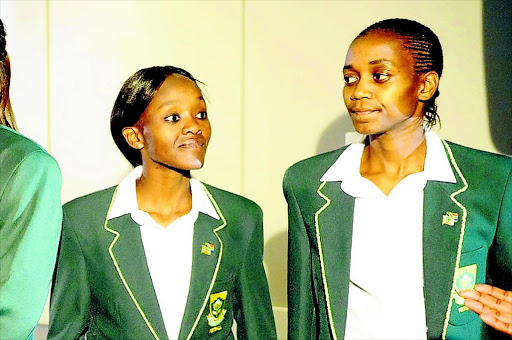 in high spirits: Proteas vice-captain Bongi Msomi and Precious Mthembu during their send-off dinner in Pretoria on Saturday before leaving for Sydney to play in the Netball World Cup Photo: Thulani Mbele

SPAR, Netball South Africa (NSA) long-term sponsors, have dangled a R1-million carrot in front of the Proteas to inspire them for the 2015 Netball Word Cup in Sydney, Australia, next month.

The quadrennial netball fiesta, which will see a total of 64 games being played, gets underway from August 7 to 16.

The South Africans have been drawn against continental arch-rivals Malawi, with the group also comprising Singapore and Sri Lanka.

Malawi are ranked fifth in the world, and this makes them the highest-ranking country in the group.

Sixth-ranked South Africa are the second-highest ranked in the group.

Mike Prentice, the sponsors' group marketing executive, says the R1-million bounty will go a long way to motivate the players at the tournament.

"We are aware that it's not going to be an easy task in Sydney but we are doing everything possible as sponsors to inspire the players," said Prentice, speaking to Sowetan after the squad's farewell dinner in Pretoria on Saturday night.

Prentice added that the players will take home R500000 for bronze medal and R750000 for silver.

NSA president Mimi Mthethwa said their preparations for the showpiece started just over three years ago.

"We have been preparing for this tournament for a long time and I think the players will give a good account of themselves in Sydney," Mthethwa said.

"In 2013, we played against England and Trinidad and Tobago in the Tri-Nations. We won the Diamond League that featured African countries like Zimbabwe and Zambia. We played Scotland last year and featured in another Diamond League. We had intensive preparations and we are ready for Sydney," she said.

Vice-captain Bongiwe Msomi warned that they were not going to Sydney to walk around and sightseeing but to compete. Skipper Maryka Holtzhausen said: "We did what was expected of us in our preparations ... we are looking forward to the tournament."

Proteas' Australian coach Norma Plummer, speaking from her native country, said they will give their best shot at the tournament.