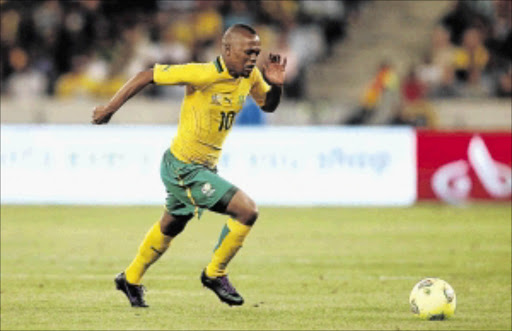 CONDUCTOR: Thulani Serero is back in the Bafana squad Photo: Shaun Roy/Gallo Images

Goals from Thulani Serero and Tokelo Rantie either side of half-time secured South Africa's passage to next year's Africa Cup of Nations, beating Sudan 2-1 at Moses Mabhida Stadium on Saturday afternoon.

Serero was instrumental in creating both, rounding off a move he began eight minutes before half-time, before turning supplier for Rantie, with a terrific through-ball which the striker buried high into the net eight minutes after the break, sending Bafana Bafana soaring into an unassailable four-point lead at the top of group A.

Sixteen minutes of pure magic, in front of a pumped-up Durban crowd of more than 32,000, wrapped-up a hugely successful qualifying campaign in which South Africa are still unbeaten after five games.

Bafana stumbled late when Salah Ibrahim pulled one back for the visitors, after a lapse in defence allowed the striker to volley home from close range.

The goal made for a tense final 20 minutes, which belonged to Sudan. With 11 players behind the ball, Sudan were allowed to pay regular visits into the Bafana half, often troubling the hosts, who looked appropriately desperate at times.

Heading into the game without a goal on home soil in two previous qualifiers -- against Nigeria and Congo-Brazzaville -- South Africa could have notched-up as many as five more, were it not for some nervous touches at the last second.

A highly-emotional affair on a cold and cloudy Durban afternoon began with a minute's silence in honour of former captain and goalkeeper Senzo Meyiwa, who was shot and killed in Gauteng on October 26.

Darren Keet was solid in only his second ever outing for the national team, having come in with the enormous task of replacing Meyiwa, who had kept four out of four clean-sheets up to Saturday.

Dean Furman was fantastic in his leadership of the team after being named skipper in his 23rd appearance for South Africa.

The afternoon's attack belonged to Serero and Rantie. Serero, whose performances for Ajax Amsterdam in the Netherlands has earned him a nomination for Caf's Africa Player of Year, looked his classy best, dazzling the home crowd with pace and skill, while producing defence-splitting passes at will.

Rantie, meanwhile, had a difficult first half after a number of chances went to waste, but followed it up with a better second which led to a fine goal, after the Bournemouth attacker danced his way through on goal, before finishing-off a world-class pass from Serero.

Despite the win, South Africa's finishing left a lot to be desired. Bongani Ndulula should have sent the team two goals up just four minutes after Serero's neat finish, but the young striker failed to keep his composure, somehow managing to miss-place his finish wide of an empty net.

Rantie could have bagged a hat-trick with the number of chances created by a Bafana team who put in one of their best performances of the campaign.

Reneilwe Letsholonyane capped the win with his 50th international for the country three minutes from time, coming on for Serero, much to the delight of the Durban crowd, who gave the Kaizer Chiefs veteran a standing ovation and a deafening welcome.

A nervy last 20 minutes looked to have troubled Bafana, who crept back into their shell in defence of their slender, but massively significant, one goal advantage.

A barrage of Sudanese attacks kept the home side camped in their own half, but a resilient back four atoned for the goal they let slip, which was the first of their campaign.

It was a deserved place at next year's tournament for Shakes Mashaba and his troops, who celebrated as if they had won the World Cup after referee Mohamed Benouza blew the final whistle.