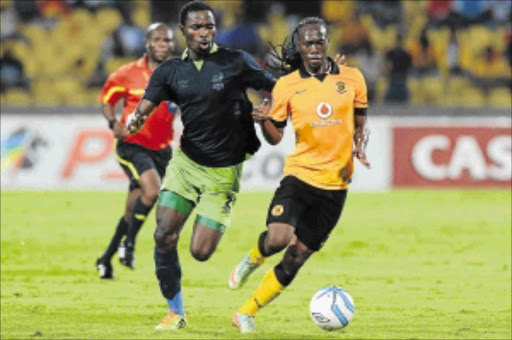 IT SEEMS the buck often stops with Platinum Stars for Kaizer Chiefs after their 15-game unbeaten run came to an abrupt end at the Royal Bafokeng Stadium last night.

Siphelele Mthembu and Robert Ng'ambi scored either side of half-time to hand the Absa Premiership leaders a 2-0 defeat ahead of the Soweto derby against rivals Orlando Pirates on Saturday.

The Buccaneers will surely go into the encounter at FNB Stadium in high spirits after a hard-earned 1-0 win over Moroka Swallows, also last night.

The old adage that the derby is usually a distraction for both Chiefs and Pirates came back to haunt Amakhosi, who had not been beaten since November last year.

Both Dikwena's goals came as a result of sloppy defending from Chiefs. As early as the ninth minute, Chiefs midfielder Willard Katsande gave away possession and Ng'ambi made the most of it by setting up striker Mthembu to put one past Reyaad Pieterse.

Malawian Ng'ambi then moved from provider to goal-scorer on the hour mark when his chest connected with Lindokuhle Mbatha's timely cross to add to Dikwena's tally and send Chiefs coach Stuart Baxter into panic mode.

The Englishman was quick to ring the changes, bringing in Knowledge Musona, Kingston Nkhatha and Matthew Rusike in place of Katlego Mphela, Morgan Gould and George Lebese. Chiefs were also missing their top scorer Bernard Parker.

At Dobsonville Stadium, Marc Strydom reports that Pirates earned a big result in the title race in new coach Vladimir Vermezovic's first match with their win against Swallows.

Pirates had Vermezovic on the bench, having secured his work permit. New striker Lehlohonolo Majoro also made a second-half debut.

While Bucs were looking for a confidence-boosting win ahead of the derby, the Birds were out to reverse a six-match winless run.

Pirates came out pushing hard for an early goal, with Thabo Matlaba providing attacking impetus from the left-back.

A pass across field from Matlaba found Tlou Segolela, the winger passing back inside to Erasmus on the right edge of the area. Erasmus shot across goal, beating goalie Greg Etafia. After their early dominance against a disorganised Birds, Pirates ran out of ideas.

Swallows should have snuck a draw as Siyabonga Nomvethe turned Nkosinathi Ogle's cross onto the upright in the 88th minute.

The veteran striker's header in injury time forced a reflex save from keeper Senzo Meyiwa, who was up to the challenge.