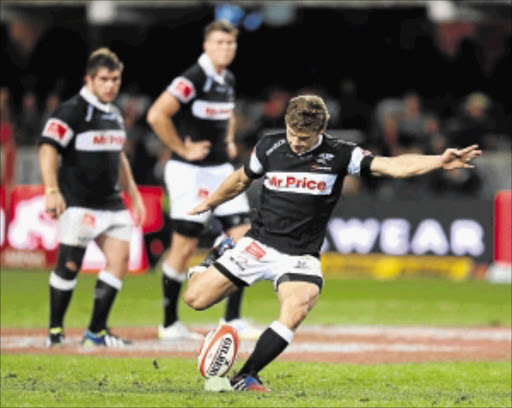 TOP OF HIS GAME: Flyhalf Patrick Lambie piloted the Sharks to their away victory over WP and also executed two fine drop goals Photo:Gallo Images

WESTERN Province fans woke up yesterday morning to a familiar hollow feeling after the Sharks comprehensively outplayed their side in Saturday's Currie Cup final at Newlands.

The visitors out-thought and out-muscled WP on their way to a deserved 33-19 win that could have been greater had the Sharks made more of the chances.

The Sharks collectively and individually were excellent on the day, but a familiar trend emerged from the home team - they wilted under the pressure of a big play-off game again.

Coach Allister Coetzee will point to the 2012 Currie Cup final win over the Sharks in Durban [WP won 25-18] as evidence that they can play well in big games.

But in that match they started as huge underdogs and won against the odds under no pressure because there was no expectation of victory.

Yesterday the Sharks raced into a 10-0 lead after six minutes.

WP never held the lead once as they tumbled to another defeat.

The only exception was last year's Currie Cup final in Durban where WP overturned an early 9-3 deficit to win 25-18 because they weren't expected to win.

"One loss doesn't make you a bad team," said Coetzee.

"We weren't allowed to properly engage with the Sharks and they were smarter than us.

"But a lot of the players are disappointed in their individual performances.

"We will take it on the chin and will come back next year."

"We all have been inspired by this beautiful display by the Sharks of talent and stamina," said the premier yesterday.

Mchunu said the people of KwaZulu-Natal had been on an emotional roller-coaster throughout the Currie Cup final.

"We have mobilised the people of this province to go to the King Shaka International Airport to welcome our heroes in style," he said.

Mchunu said the provincial government will line up a series of victory celebrations as part of promoting the great heritage of the Sharks. - Additional reporting by Sapa