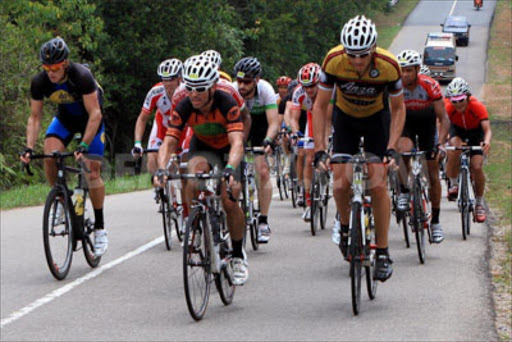 South African cycling was progressive this year, with individuals and teams making headway on the international stage and dominating local podiums.

In a historic move, MTN-Qhubeka became the first African team to join the second division of world cycling after it was officially registered as an International Cycling Union (UCI) professional continental team.

This opened a window for African cyclists to compete in major international events.

The team subsequently announced a line-up that boasted a unique blend of African and European riders that will be based in Italy next year.

Team Bonitas, meanwhile, also took a step towards International domination after it secured a partnership with French professional team La Pomme Marseille for next year.

"The French racing scene is a tough one to get into, but by partnering with La Pomme, we'll have the benefits of the instant infrastructure," said Team Bonitas owner Malcolm Lange.

Donned in their national colours, cyclists showed their mettle as they represented the country in various events.

The national road cycling team claimed victory at the 2012 Tour of Rwanda in November when Darren Lill retained the leader's jersey after the seventh stage to claim the overall win, with compatriot Dylan Girdlestone finishing in second place.

"This was an unexpected win for me," Lill said after the race.

"I went as part of the team to help the younger guys, so to claim the overall victory has come as a surprise."

Besides team performances, there were many riders who stood out this year as individuals, dominating both local and international races.

In the women's category, Ashleigh Moolman-Pasio of the Momentum-Toyota team was one of the most successful riders of the season.

"The 2012 cycling season has been very rewarding but also a very long season for me," Moolman-Pasio said on her website.

"It has been a year filled with many wonderful experiences." She won the Cape Argus Cycle Tour and the South African Road Championships title. She also bagged two gold medals at the African Continental Championships in Ougadougou, Burkina Faso.

The 27-year-old was the standout SA rider at the London Olympics, finishing 16th in the women's road race and 24th in the time trial.

She also became the first South African to finish in the top 10 at the Giro d'Italia Internazionale Femminile women's stage race, claiming 10th place in the final classification after nine days of racing in Italy.

"I finished 17th overall in my first ever Giro in 2010 and 13th overall last year. Although the jump from 13th to 10th this year does not appear big on paper, in real life effort, it is huge," she said.

Reinardt Janse van Rensburg of Team MTN-Qhubeka was another rider who had a great season, bagging 14 international titles which included the Ronde van Zeeland in the Netherlands.

"I couldn't have dreamed for the season I've had," Janse van Rensburg said.

"I've won two big races in South Africa -- the Cape Argus and the Cycle Challenge -- and 14 other international races. It has been great."

His teammate, Arran Brown, won the MTN OFM Classic in a sprint finish in Bloemfontein in November, and six days later Brown won the final leg of the Engen Dynamic Cycle Challenge in Durban.

Later that month, Brown parted ways with MTN-Qhubeka and together with Richard Baxter they announced the formation of their Cycle Fit-Road Cover team.

Meanwhile, South African road-racing champion Cherise Stander, who was openly upset by her mission from South Africa's Olympic team, later announced that she would be focussing on mountainbike racing with the goal of representing the country at the 2014 World Marathon Mountainbike Championship in Pietermaritzburg.

Robbie Hunter bagged the SA men's road race title in Nelspruit while Sifiso Nhlapo was crowned the elite men's champion at the SA National BMX Championships, and Nolan Hoffman won the silver medal in the 15km scratch race at the Track World Championships in Melbourne, Australia.

Performances by elite riders, however, were somewhat overshadowed by a doping scandal, with David George, a former teammate of Lance Armstrong, banished from the sport for two years after he tested positive for the banned drug EPO.

Following the ban instituted on George, his team, Nedbank 360Life, were disqualified as the winners of the Bridge Cape Pioneer Trek international mountainbike stage race.

The title was handed to Nico Bell and Gawie Combrinck of the Westvaal Columbia outfit.