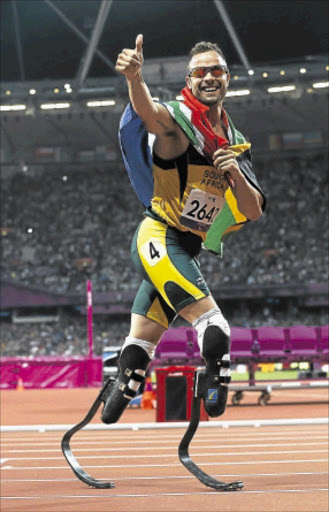 South Africa's high-profile sports took a back seat this year as the country celebrated a swift recovery at the Olympic Games in London.

Having secured only one silver medal at the previous quadrennial showpiece in Beijing, the Olympic team bounced back to bag six medals --three gold, two silver and one bronze -- in the English capital.

Despite heading into the Games with the most prospects for medals, the athletics team bagged only one silver, with 800m specialist Caster Semenya adding to the gold and silver medals she won at the 2009 and 2011 World Championships, further establishing herself as the country's top track and field athlete.

Some of the less recognised sports in the country, rowing and canoeing, gained significant exposure when the men's lightweight fours team --James Thompson, Matthew Brittain, John Smith and Sizwe Ndlovu -- fought back at the death to clinch gold, and Bridgitte Hartley bagged bronze in the women's K1 500m final.

Double-amputee Oscar Pistorius made history at the Olympics as the first amputee to compete on the track at the able-bodied Games. He reached the semi-finals of the men's 400m sprint and competed in the 4x400m relay final.

Among the more popular sports, by traditional standards, the Proteas cricket team stood head and shoulders above the rest, claiming top spot in the world rankings in all three formats of the game during the season.

While antics off the field had dominated headlines over the last few years, Cricket SA and the Proteas had plenty to celebrate in 2012.

It was not all positive, however, as the Proteas continued to struggle in global competitions in shorter formats.

In September, ranked as one of the favourites going into the ICC World Twenty20 tournament in Sri Lanka, they were dumped out of the competition after failing to win any of their three Super Eight matches.

Meanwhile, South African football was plunged into turmoil in the wake of match-fixing allegations involving high-ranking SA Football Association (Safa) officials, a month before the country was due to host the Africa Cup of Nations (Afcon) in 2013.

Safa suspended its president, Kirsten Nematandani, and four senior administrators in December after the release of a Fifa report surrounding warm-up games before the 2010 World Cup held in South Africa.

The timing could not have been worse, as Bafana Bafana had been tasked with reaching the semi-finals at the Afcon tournament, otherwise new coach Gordon Igesund could be shown the door.

Meanwhile, the SA rugby season was highlighted by the rise of young stars, with up-and-coming talent making their presence felt at all levels.

The national side underwent some significant changes in the post-World Cup year with the winds of change sweeping through the sport. The Springboks started a new era with the appointment of Heyneke Meyer as national coach and centre Jean de Villiers named as skipper.

In the majority of their Test matches, the Boks scraped through by the skin of their teeth, making a habit out of "winning ugly".

Winning in any style, however, is preferred to "losing pretty" and Meyer's record in his first season reflected that the Boks had lost only three of their 12 games.

On the golfing front, South Africa further cemented its place among the most successful nations in the world, with Ernie Els producing a stunning comeback to claim his fourth Major title at the Open Championship, Branden Grace winning four times on the European Tour, and Charl Schwartzel bagging consecutive runaway victories to end off the year.

Louis Oosthuizen rose to sixth in the global rankings, most notably losing out in a playoff to American Bubba Watson for the Masters title.

In hockey, the SA women's team finished 10th of 12 teams at the Olympics, while the men's side took 11th place, after they both won qualifying tournaments, with the SA Sports Confederation and Olympic Committee insisting the African channel was not competitive enough.

"We certainly would have liked to finish in the top eight," said SA Hockey Association chief executive Marissa Langeni.

"But we are also not naive to the fact that a world class finish is a direct consequence of a well funded and purposefully resourced programme." Boxing SA struggled to lift itself from the canvas after it was floored by a dire financial state and general maladministration.

The country's most accomplished performers in 2012 were IBF flyweight champion Moruti Mthalane and Tommy Oosthuizen, who while holding the super-middleweight title of the less-recognised IBO, gained a respected international reputation in his own right.

While South Africa ended the year with seven so-called world champions, there are so many organisations proclaiming their own global champions that many of the titles are hardly worth the paper on which they are imprinted.

In the circumstances, the highly-regarded, long-established Ring Magazine's world rankings are widely considered the most legitimate available -- with Mthalane ranked third in the world by Ring and Oosthuizen in fourth place.

The only two other South Africans rated among the top 10 by Ring are junior-featherweight Jeffrey Mathebula in fourth position and former IBF strawweight champion Nkosinathi Joyi at number seven.

An incident that shocked and saddened the boxing fraternity was the murder of former WBO heavyweight champion Corrie Sanders at the age of 46 during a robbery in a restaurant near Britz in September.

With the likes of Gerrie Coetzee, the modest Sanders was rated one of South Africa's best-ever heavyweights.

It was a tough year for South Africa's top-ranked tennis players, with Kevin Anderson and Chanelle Scheepers falling steadily in the global rankings.

Big-serving Anderson, the country's top men's player, ended the year in 37th position in the ATP ratings list after reaching a career-high 28th in March.

Scheepers ended her season in 60th place in the WTA ratings, 23 spots lower than her career best after a breakthrough campaign the year before.

The stature of netball in South Africa continued to rise in 2012 as it found its way onto prime time television with the promise of more to come.

Netball South Africa announced a five-year broadcast partnership with SuperSport which would see netball being broadcast live from 2013, and sports minister Fikile Mbalula announced the introduction of a professional netball league, due to start next year.

In June, the Proteas beat Jamaica 56-49, recording their first victory over the Sunshine Girls in 28 years, in what was considered a turning point for the team.

In cycling, a historic move was made by MTN-Qhubeka, which became the first African team to join the second division of world cycling after it was officially registered as an International Cycling Union (UCI) professional continental team.

This opened a window for African cyclists to compete in major international events.

South African sport was not devoid of controversy during 2012.

Aside from the football match-fixing scandal, performances by elite cyclists were somewhat overshadowed by a doping controversy, with David George, a former teammate of Lance Armstrong, banished from the sport for two years after he tested positive for the banned drug EPO.

Athletics in the country also experienced its fair share of scandal, with sprint star Tsholofelo Thipe and Rapula Sefenyatso the most recent to test positive for banned substances.

The Comrades Marathon was rocked by a doping scandal when the 2012 winner, Ludwick Mamabolo, tested positive for methylhexaneamine.

Earlier in the year, one of the country's most promising stars, former world junior long jump champion Luvo Manyonga, tested positive for methamphetamine, commonly known as 'tik'. He was banned from competition for 18 months.