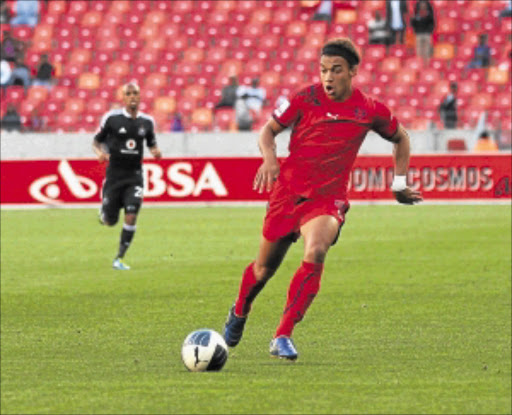 DISPUTE NOT OVER: Matthew Rusike of Jomo Cosmos has signed for Chiefs. Photo: Gallo Images

ZIMBABWE-BORN dribbling wizard Matthew Rusike is itching to return to action in the Premier Soccer League to contribute to the success of Kaizer Chiefs - but he may have to wait a bit longer.

Rusike was finally cleared to join Chiefs this week after his dispute with Jomo Cosmos was settled.

But a fuming Jomo Sono, owner and coach of Ezenkosi, yesterday vowed to appeal against the decision, saying the matter had been set down for September 18. He criticised the PSL's handling of the case.

Rusike decided to go to Naturena after Jomo Cosmos were relegated to the National First Division, but could not sign for Chiefs after Ezenkosi lodged a dispute with the PSL.

He started training with Amakhosi last month while waiting for the dispute to be resolved.

Rusike has signed a three-year deal.

"We are delighted Rusike is now officially our player. He is working very hard at training and will be ready to play once the technical team is satisfied with his fitness level," said Motaung.

Rusike said: "Chiefs are one of the big soccer clubs in the world. I'm delighted to join them and that my dispute has been cleared. I want to help win trophies."

He will wear jersey number 21, which used to belong to his compatriot Knowledge Musona, who is now playing in Germany.

Sono said yesterday: "We cannot understand the haste with which they (the PSL) wanted to deal with this issue. Is it because it is Chiefs? They told us on Friday that the matter would be discussed on Tuesday and we told them our lawyers knew of the later date and were not available.

"We are not surprised they did this. Cosmos is not one of the favourites with the PSL and we don't expect anything from them. We are going to appeal and carry on fighting. These people are taking football back to the days of Abdul Bhamjee. It is a pity."