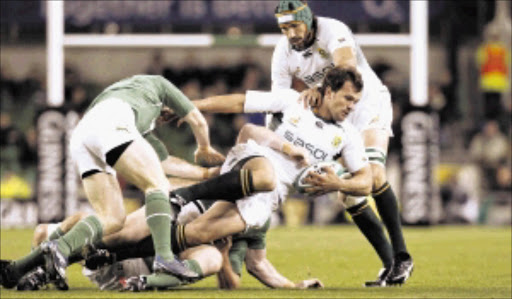 DUBLIN - PETER de Villiers insisted his side could mount a successful defence of the World Cup with a game plan based on their traditional strengths after the Springboks beat Ireland 23-21.

This was a much-needed victory for the Springboks, coming as it did after a Tri-Nations where they lost five of their six matches.

De Villiers said there was still merit in the Springboks' essential style.

"That's the way we play. For us to stick to our plan was heartwarming.

"The game will always move. We try to be realistic but then give the captain the freedom on the field to make the decision on the day.

He added: "At the end we saw some ghosts from the Tri-Nations."

South Africa captain Victor Matfield, leading the side in the absence of injured John Smit, was delighted with his new-look side.

South Africa may have had to leave 13 injured players at home but Matfield said the absence of home lock Paul O'Connell had been crucial in ending a run of three straight defeats by Ireland.

Victory for South Africa, bidding for a first grand slam against the four 'Home Nations' since 1960, completed a trio of triumphs for the Tri-Nations on Saturday after New Zealand defeated England 26-16 and Australia beat Wales 25-16.