The memo keeps to the parameters of talks about talks, focusing on the government’s reasons for refusing to meet the ANC 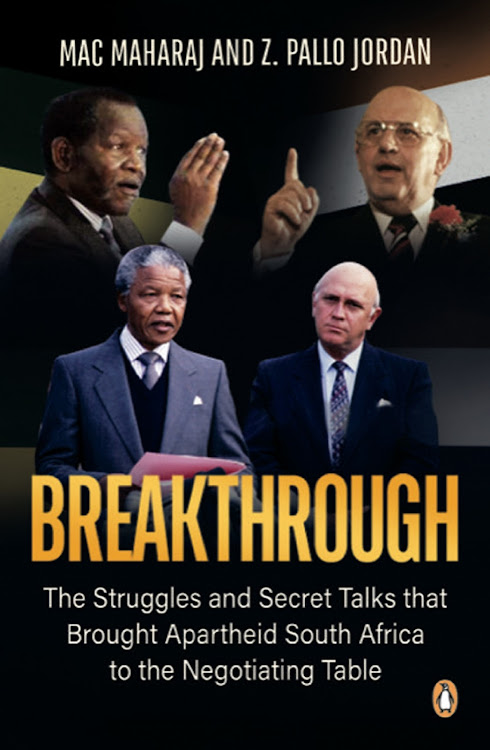 The cover of the Breakthrough book by Mac Maharaj and Pallo Jordan.
Image: Supplied

The ‘Mandela document’, as his [Nelson Mandela] 1989 memo to PW Botha became known, is the most unambiguous indication of what Mandela set out to achieve when he began to engage with the regime.

It adheres to the explanation he gave to a concerned [Oliver] Tambo when the latter smuggled a message into jail asking him what he was up to behind those prison walls. (‘A meeting between the ANC and the government,’ was Mandela’s curt response.)

The memo keeps to the parameters of talks about talks, focusing on the government’s reasons for refusing to meet the ANC. Mandela robustly challenges the government’s precondition that the ANC renounce violence, and defends the alliance of the ANC and the SACP.

He disabuses the government of its claim that socialism was the ANC’s goal and insists that the Freedom Charter envisaged a mixed economy. Mandela also rejects the government’s condemnation of the principle of majority rule, which he insists is a necessary condition for stability and peace to prevail in SA.

"[M]ajority rule and internal peace,” Mandela argued, “are like the two sides of a single coin, and white South Africa simply has to accept that there will never be peace and stability in this country until the principle is fully applied.” His discussions with Coetsee and the Barnard team had led him to hone his argument and Mandela urged that “the key to the whole situation is a negotiated settlement and a meeting between the government and the ANC will be the first major step towards lasting peace in the country”.

Join Sam Mkokeli in conversation with Mac Maharaj and Pallo Jordan, authors of the 'Breakthrough - The struggles and secret talks that brought ...
News
10 months ago

He crisply set out the challenge that negotiations would have to confront:

Two political issues will have to be addressed at such a meeting: firstly, the demand for majority rule in a unitary state, secondly, the concern of white SA over this demand, as well as the insistence of whites on structural guarantees that majority rule will not mean domination of the white minority by blacks.

The most crucial task which will face the government and the ANC will be to reconcile these two positions. Such reconciliation will be achieved only if both parties are willing to compromise.

The talks with Coetsee and the team led by Barnard had reached the point where both sides understood the core issues that negotiations should address. By this time, Tambo had secretly briefed Mandela about what later came to be known as the Harare Declaration.

The Harare Declaration, adopted on August 21 1989 by the OAU subcommittee on Southern Africa at its summit in Harare, Zimbabwe, urged the apartheid regime “to take measures to create a climate for negotiations, to put an end to apartheid and define a new constitutional order based on a set of democratic principles (also listed in the declaration). It also elaborated on the conditions for the negotiations to start.” Any hopes that the regime may have entertained of detaching Mandela from the ANC were dashed. The country continued to hurtle towards what many began to see as its Armageddon.

#PoliticsWednesday - Join Sam Mkokeli (@msmkokeli ) in conversation with Mac Maharaj and Pallo Jordan, authors of the 'Breakthrough - The struggles and secret talks that brought apartheid SA to the negotiating table.' https://t.co/ck81KG3cXW pic.twitter.com/GyL6ZLen2C

Tambo made sure he had fully canvassed the heads of the Frontline States by the time the ANC NEC met on August 9 1989 to finalise the draft of the Harare Declaration. That evening, he suffered a debilitating stroke which rendered him out of action. He had devoted all his energy to ensuring that the draft would be adopted by the Frontline States, who in turn would sponsor it at the OAU, who in turn would take it to the UN for its imprimatur.

Parallel to these developments, another initiative was unfolding. The Mells Park talks had their origins in a meeting between Tambo and a group of British businesspeople in London in June 1986. Michael Young, the political advisor to Rudolph Agnew, chairman and group CEO of Consolidated Gold Fields, had approached Tambo to ask what a company such as theirs could do. Tambo asked him to “help build a bridge between the ANC and those Afrikaners close to the government as progress was impossible without some form of communication”.

#PoliticsWednesday - Join Sam Mkokeli in conversation with Mac Maharaj and Pallo Jordan, authors of the 'Breakthrough - The struggles and secret talks that brought apartheid SA to the negotiating table.' https://t.co/A6XJKYoIpD

After securing Agnew’s approval, Young approached senior figures in the Afrikaner establishment. They included academics such as Willie Esterhuyse and Sampie Terreblanche.

Both appear to have been members of the Broederbond at the time and would therefore have been privy to the June 1986 Broederbond document titled ‘Basic political policy conditions for the survival of the Afrikaner’. There is a correlation between the views advanced in this paper and the line of questions posed by Esterhuyse and Terreblanche at the Mells Park talks.

Esterhuyse was approached by Fleur de Villiers, a consultant for Consolidated Gold Fields, who called him from London to brief him on Young’s proposal. A few weeks later, he received a phone call from Pretoria requesting a meeting. This led to a discussion with Koos Kruger and Möller Dippenaar of the NIS at Esterhuyse’s home in Stellenbosch.

Esterhuyse felt that, in light of the Consolidated Gold Fields project, co-operating with the NIS would give him the opportunity to advance a process of peace and democratisation. After that, he received regular, intensive briefings from the NIS in various safe houses, even meeting NIS head Niël Barnard at some stage.

In his record of the second bilateral Mells Park meeting held from February 22 to 24 1988, Young states that Esterhuyse “briefed the state president following the October session.

Both the state president and Dr Niel Barnard, director-general of the National Intelligence Agency [sic], had asked Esterhuyse to ensure the continuance of the dialogue.” In a memo dated May 31 1988, Young adds that “since the last round of discussions held at Eastwell Manor from  February 13-15 1988 the state president has been fully briefed and is now positively in favour of further discussions.

10 days that shook our country

In the face of justice

Zuma overlooking Moseneke has interesting implications THEY belonged to different liberation movements, separated by ideology but united by the goal ...
Opinion
11 years ago

'We are a shocked nation' - Allan Boesak

SINCE the coming of democracy, as a nation we have been grappling with seemingly unsolvable problems and invincible challenges. Every day brings new ...
Opinion
10 years ago
Next Article