Next time you burn a book, know you're drawing more attention to it 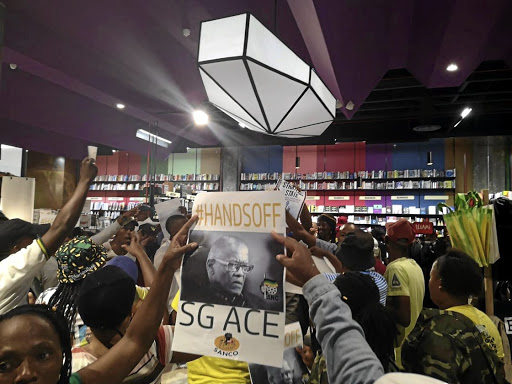 Protesters storm the book launch of 'Gangster State' at Exclusive Books in Sandton, in defence of Ace Magashule, who is the main actor in the book unravelling state capture in the Free State. /NEO GOBA

In this week's Game of Bags, camera focuses on a group of individuals, grunting as they pay undivided attention to mounds of sausages, hunks of cheese, cocktail olives, slivers of cold meats and other finger foods.

There are also hundreds of bottles of sauvignon blanc and other fine wines.

The camera moves steadily to reveal that this is unfolding inside a bookstore, Exclusive Books, in Sandton City, Joburg.

It is while the masses are still grunting and eating that the man in charge of the ceremony that is about to take place, Mr Mondli Delights, editor of one of the country's Sunday rags, asks for everyone's attention: "We're about to begin with our proceedings. As everyone knows, we are here to launch the thought-provoking book, Gangster State, by my good friend here, Pieter-Louis Myburgh..."

Some of the people at the feeding trough look angrily at Mondli, and say, "Can't he see we are still eating?"

Investigative journalist and author Pieter-Louis Myburgh says he will not be deterred by disruptions and the tearing up of his book, Gangster State: ...
News
2 years ago

At any rate, Mondli proceeds to introduce the author of the book that has become a talking point.

It is while he is talking that the crowds, now seated and a bit loose-tongued from the wines they've consumed, suddenly take off their coats to reveal Khongolose T-shirts. There are also placards that read: STRATCOM STATE.

They start toyi-toying and shouting abuse at the author of the book. Camera zooms in on three men snatching copies of the book from a shelf.

They proceed to rip pages off the books and drop them on the ground and start stomping on them with a vengeance.

Suddenly, it's a free for all. "Down with imperialist agents, down! Leave Comrade Ace alone!"

Ace, of course, is the secretary-general of Khongolose. He is the main subject of the book. He is Mr Macaphuna. In isiZulu to caphuna is to "scoop".

Those who know him well call him Mr Superbags. Because he knows how to handle bags.

Others call him Mr Ten Percent. This, because he insists on ten percent for every tender that is given out by the provincial government of the Free State.

The main thesis of the book, Gangster State: Unravelling Ace Magashule's Web of Capture, is that Mr Macaphuna has been
central to state capture for a long time.

The book suggests that the gravy tendencies of Gedleyihlekisa pale into insignificance compared to Mr Macaphuna's.

People who've tried to stand in the way of Mr Macaphuna's greed, it is alleged, have long gone to the land of the ancestors. Did we hear the name Noby Ngombane? Let's not rather go there!

SACP general secretary Blade Nzimande has hit out at ANCYL members from the Free State who interrupted the book launch of Pieter-Louis Myburgh, ...
News
2 years ago

At any rate, what was to have been a book launch ends up in disarray, with Mr Mondli Delights and the author running for cover while Sandton City security move in to restore sanity.

The following day, another scene: Camera zooms in on a group of youths wearing Khongolose T-shirts, dancing around a big bonfire. They are chanting "Leave Ace alone!"

Somebody throws in more copies of the offending book into the bonfire. The dancing continues.

Next scene: People burning tyres in Alex. Our journalists ask one of them: "Why are you burning things down?"

The answer is to the tune of: "Khongolose must stop telling us about books that need to be burned! We need service delivery!"

Next scene: At Exclusive Books, there's a long line of people. A member of our crew starts interviewing them: "Why are you standing in this line?"

Respondent: "I'm here to buy this book about Ace. I actually didn't know who he was until they tried to stop the launch the other day. Now, I believe I have every reason to find out who he is."

Journalist speaking to Camera: "Well, there you have it. If you burn books, no matter how you hate the content, you're only making people wonder what it is you have to hide."
Watch out for the next episode of Game of Bags!"