Shangaan hatred a blot to us all 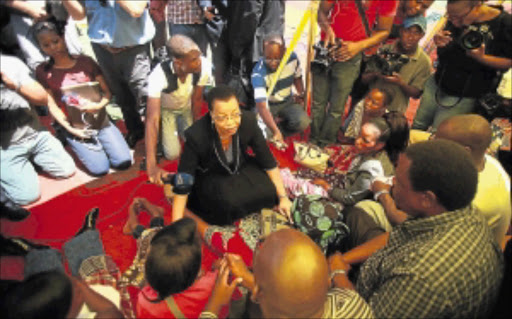 SHOWING SOLIDARITY: Former first lady Graca Machel speaking to family members of Mido Macia, the taxi driver and Mozambican national who was tied to the back of a police van and dragged along a street in Daveyton. He died in a police cell two hours later. PHOTO: SIZWE NDINGANE

MANY excuses have emerged in the aftermath of the death of Mido Macia, the Mozambican taxi driver who died in a cell after being handcuffed and dragged for 400m behind a van by police officers.

Some, including President Jacob Zuma, believe it is indicative of the legacy of apartheid violence.

Like former intelligence minister Ronnie Kasrils, some attribute the brutality to the militarisation of the police by Zuma and former police commissioner Bheki Cele.

And others speak of the generally toxic xenophobic atmosphere in South Africa.

These excuses skirt around the real issue: the deep-seated prejudice that many South Africans have of Shangaan people in general - and Mozambicans in particular.

It rolls through our tongues with ease. If someone has done something that we regard as stupid, he is a Shangaan. If something has been stolen, don't think twice, blame it on a Shangaan.

If someone is badly dressed, at least in our narrow opinion, he or she must be a Shangaan.

"Why are you behaving like a Shangaan?" we easily ask of those whose conduct we disapprove of.

In some cases, such remarks come across as jokes. And yet they convey a message as destructive as George Bush's cluster bombs that rained over Baghdad in 2003. Maybe I'm exaggerating, but it is true that such remarks are not an end in themselves - they are a means to a murderous end.

There can be no better evidence than the killing of Macia in Daveyton and the setting alight of Ernesto Nhamauave, also a Mozambican national, in 2008.

Needless to say, this ethnic chauvinism has no rational basis, regardless of what its exponents might think.

That some among us have brains intoxicated by such prejudice is tragic considering that we fought for equality. Our constitution expects us to live in harmony, with diversity as a strength rather than a weakness.

Prejudice directed at Shangaans from Mozambique has the potential to cool the otherwise warm deep-rooted diplomatic, economic and familial relations.

Mozambique is one of the front-line states that fought the apartheid regime to help free us from legalised white racial supremacy - another extreme ethnic chauvinism. For its stance, that country paid a terrible price.

The powerful apartheid regime made it its mission to destroy Mozambique. It abetted rebels Renamo, allies of the West, in a bid to oust Frelimo, the movement aligned to the ANC.

Many South African activists were hunted down and killed in Mozambique, a country which they regarded as their home.

The scars of war, illustrated by the extreme underdevelopment of that country, will take years to heal.

Some South Africans who lived in exile there bear their own scars. One such person is former Constitutional Court Justice Albie Sachs who lost an arm and part of his sight when a car he was travelling in was bombed by apartheid agents.

On the economic front, South Africa's mining revolution and industrialisation under apartheid was aided by a labour system that imported labour from neighbouring countries.

Mozambicans and citizens from other southern African countries earned slave wages in exchange for laying a solid base for South Africa's economic development.

Cheap Mozambican labour continues to fuel our economy. Unfortunately, they still earn the kind of wages we frown upon. For them it is better than what they would earn back home had they been lucky enough to get a job there.

That our relations with Mozambique is cemented in economics, history, politics and blood is taken for granted.

Like South Africa, Mozambique is now a democracy. One need not make comparisons, but Mozambique is a lovely neighbour despite its many problems, some similar to ours. And like us, Mozambicans yearn for faster economic growth, jobs and better things in life.

The dawn of democracy opened up the borders for trade and cross-border investments between the two countries.

South Africa depends on Mozambique for some of its energy needs. There would probably have been more load-shedding here had it not been for this extra source of energy supply. Our economy would be poorer.

And there would have been little foreign direct investment pouring into Mozambique had South Africa not invested in the energy generation project.

Many South African business people, farmers and retailers have invested in Mozambique. Human settlements minister Tokyo Sexwale even purchased an island off the Mozambican coast.

The governments of both countries kick-started sound economic relations when they launched the Maputo Development Corridor a few years ago, enabling South Africa to export some of its products via the Mozambican port.

With Zimbabwe, the countries have also launched the trans-frontier park, allowing game to roam free, a move hailed as a tourism booster, cementing relations even further.

The deadly ethnic prejudice is a blot to all this.