'The worst shall govern' 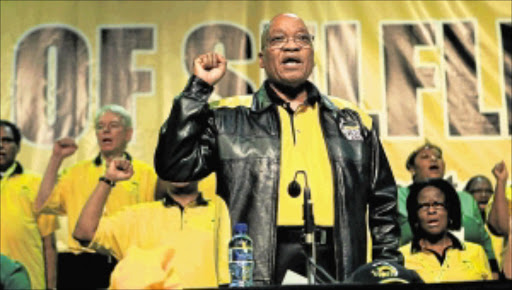 COMMENT: The long-term consequences of Zuma's leadership are a cause for concern

For now, let us focus on Zuma and the party he leads, the ANC. Next week we will have an opportunity to deal with another of Zuma's multiple dimensions of leadership - thanks to this Sowetan debate.

At the outset a die-hard member of the ANC can be imagined retorting: "Who are you to tell us about our president?"

The answer is quite simple: we are observers of South African politics. Since we have eyes to see and brains to think, we need no permission from anybody to form views about Zuma.

That we are not members of the ANC does not mean we are blind, nor does it imply we cannot think.

What, then, do we see from the vantage point of our distance?

To properly understand Zuma in the ANC we ought first to remember all ANC presidents since 1912 - from John Dube to Thabo Mbeki. When we do this, a question will arise automatically: How different is Zuma from the rest?

The differences are simple yet profound. Most, if not all ANC leaders in history, were educated in the formal sense. Zuma is uneducated. His informal education is limited to a bare minimum.

While some of the ANC leaders later became unpopular - such as Josiah Gumede, James Moroka or Thabo Mbeki - their intellectual credentials remained intact. Zuma has no credentials to speak of.

With regard to ethics and morality, all ANC presidents were men of stature in society. We all know why Zuma is liked by comedians and cartoonists. No previous president wears a shower cap in his grave.

While it has not been documented anywhere, the selection of presidents in the ANC has always been guided by the tacit principle: "the best shall lead".

It is true that, historically, there have been leaders who were initially considered best but later turned out to be a disappointment. Pixley Seme - the intellectual father of the ANC - was replaced by ZR Mahabane in 1937 under accusations of autocracy.

But there has never been a leader in the ANC who was, from the beginning, as compromised as Jacob Zuma. Thus far, Zuma is the only president of the ANC to whom "the best shall lead" principle patently does not apply.

If Zuma did not incarnate victimhood in the faction-ridden politics of the latter-day ANC, nothing exceptional would have propelled him to the fortuitous heights he now occupies.

Other than the compensation of giggling affability, little in the form of intellectual distinction places Zuma above the level of an average member of the ANC. In private conversations most intelligent ANC members laugh at their president.

This cannot be understood without a deeper appreciation of rural psychology. When ruralitarians see someone from their village on television, they interpret it as a representation of their own village.

And so do average members of the ANC view Jacob Zuma. In him they see the manifestation of an easy way from ordinariness to political greatness- "If he made it without going to school we can too".

Before reflecting on the future implications of Zuma in the ANC, we must deal with some popular narratives cleverly woven by Zuma's marketing agents.

Key among the narratives is the promise of greater unity; that Zuma would unify the ANC. This is a question for honest South Africans: Is the ANC more united than before?

There is also the gospel of growth; that the ANC reached its million-membership mark under Zuma. This is true. What is debatable is the quality of the people recruited by Zuma.

What exactly do Zuma's new members want from the ruling party? Tenders? Political connection? Jobs in government? Protection when in trouble with the law?

So far only sangomas can tell as to the content of Zuma's political agenda for the ANC, which ought to be distinct from previous leaders.

Beyond the immediate, the faint voice of posterity can be heard asking: What are the long-term consequences of a leader like Zuma?

Far from it; Zuma is not an organic intellectual. He is a lucky ruralitarian who has benefited from an opening created by factional politics in an old liberation movement renowned for leadership excellence, the ANC.

Interpreted critically, Zuma could also be viewed as a sign that his party, the ANC, is ageing - thereby forgetting what it used to value excellence when it was younger.

The implications are dire. To younger generations - long after Zuma - the difference between an ordinary member and a leader might no longer be clear.

Should there be anyone who finds this far-fetched, let the question be answered: Other than the mere fact that he holds the celebrated position of president, why must Julius Malema respect Jacob Zuma?

So the ANC finds itself at a crossroads. Its soul got captured by a perverse ordinariness. Its collective imagination has become crippled by short-term expediency.

Truly true truth has become voluntarily inaccessible to the "wise" in the ANC. Old voices of conscience, such as Pallo Jordan, have become authors of apologia.

They have appointed themselves hecklers of anybody who sees anything wrong with their party. If they don't heckle this very column, silent insults are guaranteed.

In all this, truth is the victim. But as the saying goes, "Truth is like cream in milk; it always rises to the top".

- Mashele is CEO of the Forum for Public Dialogue (www.fpd.org.za). He lectures politics at the University of Pretoria, and is a member of the Midrand Group. He is author of The Death of our Society, available at Exclusive Books