Malema does not mince his words 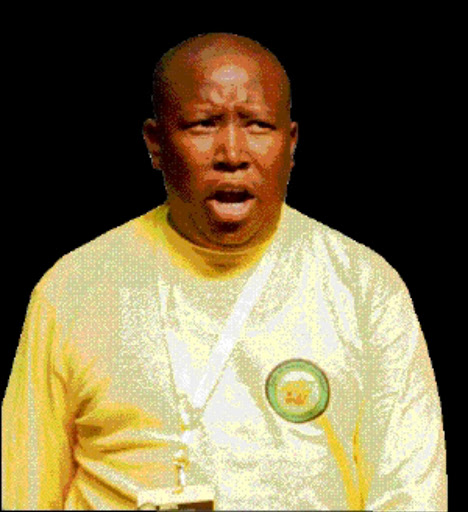 THE ANC Youth League's elective conference at Gallagher Estate in Midrand ended on a very high note. To put it bluntly, this conference and its outcomes have caused a great commotion on the tranquil South African political landscape.

Why was this conference so critical and why were its outcomes watched with so much bated breath?

Before we attempt to answer these questions let's dispense with the given. There was no gainsaying the fact that Julius Malema was going to be crowned president of the ANCYL.

There was also no gainsaying the fact that Malema was not going to back-track on the nationalisation (of mines) agenda. So in the light of the above, what is it that made this conference historic or, dare I say, important.

Firstly, this conference affirmed and confirmed Malema as a critical voice of the youth in the current South African trajectory.

Secondly, this conference confirmed Malema as political and ideological heir of the mantle of Anton Lembede and AP Mda, the two fiery founding leaders of the league.

Fourthly, he exposed his Pan African political and ideological outlook.

Even an organisation such as the PAC has never, since the unbanning of opposition parties, attracted so many African delegates and solidarity organisations as the league has done.

Fifthly, Malema has brought about a greater urgency to issues such as nationalisation and land reform.

In this case, he has disturbed the now quintessential politics of diplomacy with the former oppressors delaying fundamental reform. He has publicly refused to let such thorny issues as the land redistribution die a slow death.

Malema has broken ranks with the slow tradition of appeasement that risks reducing the South African state to the role of the managerial staff of multi-national and trans-nationals interests.

In this case he stands squarely on the same historical time-lime as Lembede, OR Tambo, Mda and Robert Mangaliso Sobukwe who, during their times as youth leaders, did not mince their words.

The latter once said: "Tell a man whose house is on fire to give a moderate alarm. Tell a women to peacefully extricate her baby from the arms of the ravisher ... but do not tell me to use moderation in the cause like the present."

Assured of victory, Malema threw radical epithets to his detractors in the ANC and without.

Malema challenges the frills and trappings of the South African political project since the advent of Codesa, and threatens to disrupt those shock-absorbers around which the country was built.

He consistently asks uncomfortable questions that we as a society have turned a deaf ear to.

He has come out of the elective conference with frenzied determination, no longer asking questions but answering them instead.

He throws away the gimmicks of societal inequality and economic oppression of the vast majority of our people whose circumstances are getting all the more unbearable.

Those who were assured of their colonial loot that has been relayed from one generation to another have reason to be worried - and very worried at that.

Nationalisation seeks not only to address political and ideological questions, but of material importance is that it seeks to address fundamental moral questions about the need for distributive justice.

Poverty is not natural but arose as a result of human greed and power over resources.

We might not like the robustness with which he raises issues, but we surely concede that all is not well. We concede that changes have been brought about and yet much more still needs to be done.

In 1949 the league went to the Bloemfontein ANC conference armed with a "Programme of Action". They lobbied Dr AB Xuma to support the programme or risk ejection from the leadership.

Mandela personally went to Xuma's house and only received a scold and rebuke from the then president.

Today, Malema yields a political axe on one hand and on the other a "Programme of Action".

He is asking if we want the head or tail, and each has dire consequences.

Of critical importance is the fact that Malema has the benefit of youth which will see him around for a long time to come.

The other importance of this conference is the fact that it will set the tone for the ANC elective conference next year.