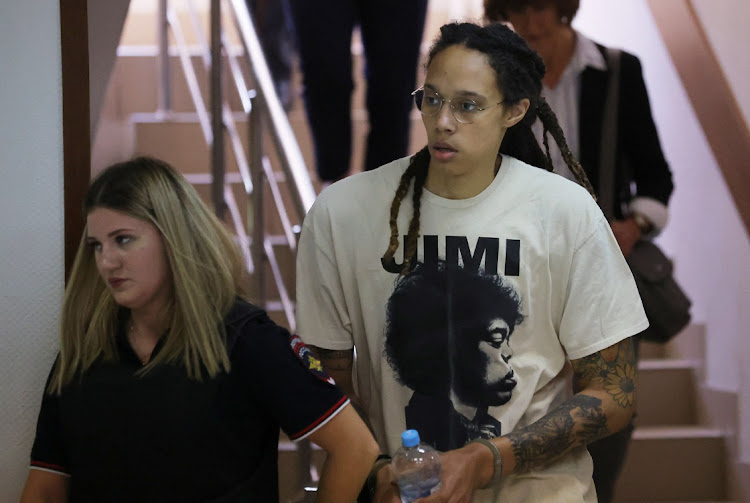 U.S. basketball player Brittney Griner, who was detained in March at Moscow's Sheremetyevo airport and later charged with illegal possession of cannabis, is escorted before a court hearing in Khimki outside Moscow, Russia July 1, 2022.
Image: Evgenia Novozhenina

US basketball star Brittney Griner went on trial in a court on the outskirts of Moscow on Friday to face drug charges that could see her face up to 10 years in prison.

The case, which coincides with fraught relations between Moscow and Washington over the conflict in Ukraine, was brought after Russian authorities said they found vape cartridges containing hashish oil in Griner's luggage at a Moscow airport in February.

Griner, a star in the US-based Women's National Basketball Association (WNBA), was arrested and charged with smuggling a large quantity of drugs.

The 31-year-old athlete was seen arriving at Khimki City Court in handcuffs shortly after noon Moscow time on Friday, wearing a Jimi Hendrix T-shirt and sneakers without laces, which are forbidden in Russian jails.

The prosecutor told Griner that she was being charged with intentionally transporting narcotics. Griner spoke to say she understood the charges.

Three employees of the US embassy, including deputy of chief of mission Elizabeth Rood, were present in the courtroom. Griner was seated in a cage with a zip-lock bag of cookies and a bottle of mineral water.

Griner told a Reuters reporter she was finding detention hard because she was unable to speak Russian, and that she was unable to fully keep up with physical fitness, only general exercises such as stretching.

Her lawyers told Reuters they would not say yet whether or not she would be pleading guilty.

Russian police said on Wednesday they had detained a health worker in the Kaliningrad region for allegedly selling fake coronavirus vaccination ...
News
1 year ago

Asked about the case, Kremlin spokesperson Dmitry Peskov denied it was politically motivated.

“I can only operate with known facts, and the facts indicate that the eminent athlete was detained with illegal drugs that contained narcotic substances. There are articles in Russian legislation that provide for punishment for such crimes,” he told reporters. “Only the court can pass a verdict.”

US officials and a score of athletes have called for the release of Griner - or “BG” as she is known to basketball fans. They say she has been wrongfully detained and should be immediately returned to her family in the United States.

Griner's detention also prompted concerns that Moscow could use the two-time Olympic gold medallist to negotiate the release of a high-profile Russian in US custody.

The Kremlin has said that Griner violated Russian laws and denied she was being held hostage amid Russia's stand-off with the United States.

Griner, a centre for the Phoenix Mercury, had played for UMMC Ekaterinburg in Russia during the WNBA off-season, like several other US players offered lucrative contracts by the Russian Women's Basketball Premier League.

However some have now left the Russian league, amid Griner's detention and Russia's military intervention in Ukraine.

Griner's wife, Cherelle Griner, told CNN in an interview on Thursday evening that she was hoping for a meeting with U.S. President Joe Biden.

“I would love for him to tell me he cares,” Cherelle Griner said.

The US government has warned citizens against travelling to Russia in light of the “potential for harassment against US citizens by Russian government security officials”.

EXPLAINER: How could Russia's Putin be prosecuted for war crimes in Ukraine?

US President Joe Biden has publicly called Russian President Vladimir Putin a war criminal, but legal experts said a prosecution of Putin or other ...
News
4 months ago

British-Iranian aid worker Nazanin Zaghari-Ratcliffe and Anoosheh Ashoori arrived in Britain from Iran on Thursday, ending an ordeal during which ...
News
5 months ago

Talks between Ukraine and Russia have started and the Ukrainian delegation's agenda is to agree an immediate ceasefire and humanitarian corridors to ...
News
5 months ago
Next Article