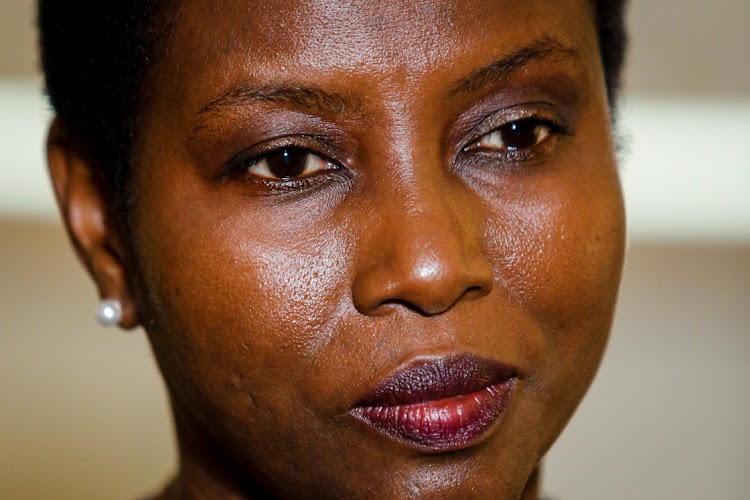 Haiti's former first lady Martine Moise speaks during an interview with Reuters on her husband's assassination in an undisclosed location, on August 30, 2021.
Image: REUTERS/Eva Marie Uzcategui

The widow of Haiti's slain President Jovenel Moise called on the international community to help track down those responsible for gunning down her husband in a late night raid by suspected mercenaries at the couple's home in July.

Moise's assassination plunged the Caribbean nation, already plagued by hunger and gang violence, further into chaos, and triggered a hunt for the masterminds across the Americas.

Wearing a black dress and sling following the injuries she suffered during the attack, Martine Moise told Reuters in a room flanked by bodyguards on Monday that while Haitian authorities had made some advances, she feared progress had slowed.

"I feel that the process is... stalling a little," she said. "The people that did this are still out there, and I don't know if their name will ever be out. Every country that can help, please help."

Nearly two months after the July 7 assassination of her husband, key aspects of the murder remain shrouded in mystery. Haitian police have arrested more than three dozen suspects, including 18 Colombian mercenaries, an obscure Haitian-American doctor they say aspired to be president, and the head of Moise's security team.

But they have made public little in the way of evidence.

Families gathered in villages in southwestern Haiti this weekend to hold church and funeral services a week after an earthquake battered the region, ...
News
4 months ago

She said she had spoken twice with the U.S. Federal Bureau of Investigation (FBI) and felt they could "find the people that financed that odious crime."

As security worries have dogged the investigation in Haiti, one judge investigating the case stepped down, citing concerns for his safety.

First lady Moise said Haiti's Prime Minister Ariel Henry, who is also now dealing with the aftermath of an August earthquake that killed more than 2,000 people, must call for elections as soon as possible to ensure stability.

"I think the advice that my husband would give him (is) try to have an election. With the election you can have peace, you can think long term," she said.

Elections initially slated for September have been postponed until November, and some have speculated they could be delayed further following the quake.

"If they want elections to happen, (they) will," said Moise.

Moise confirmed previous comments she had made in interviews on her interest in running for president herself but said that she would take care of her family first.

"I want to run for president. I won't let the vision of the president die with him. With the earthquake too, there's a lot to be done in Haiti," she said.

Tensions in Haiti were rising on Saturday, one week after a devastating earthquake that killed more than 2,000 people, as scant aid has arrived in ...
News
4 months ago

Amid the ongoing investigation and arrests, conspiracy theories about the murder in Haiti have swirled for weeks.

Friends of the murdered president have told Reuters he feared for his life immediately before he was killed.

His wife on Monday said he had not talked to her of a specific plot against him.

"If he knew he would talk about it... but he never did," she said. "Because having Colombians, having soldiers here in Haiti, they are here for something."

She denied social media rumors that Moise had squirreled away millions in cash in his official residence in the upscale suburb of Petion-Ville.

"It is a president. There is some money. But the amount of $48 million that I heard in social media, that can't be true. Where in the room (can you stick) $48 million?"

Hurricane Grace barreled into the oil-producing Mexican state of Veracruz with howling winds on Saturday, threatening coastal areas with flooding ...
News
4 months ago

Haiti's hospitals were swamped on Sunday by thousands of injured residents after a devastating earthquake the day before killed at least 1,297 people ...
News
5 months ago

When Lydie Jean-Baptiste saw her neighbors running from their homes on Saturday and felt the ground begin to shake beneath her feet, the 62-year-old ...
News
5 months ago
Next Article