WATCH | 'So disgusting': Takeaway moemish as woman gets deep-fried towel instead of chicken 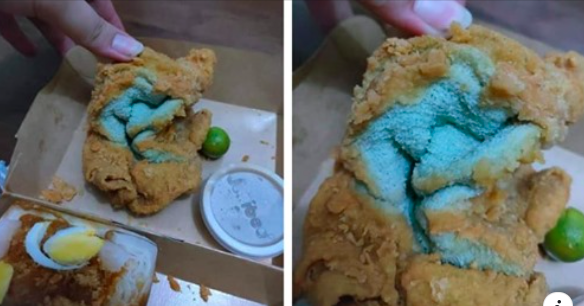 A woman in the Philippines got fried towel instead of fried chicken.
Image: Screenshot/Alique Perez/Facebook

A Philippine woman's dinner turned into a moemish after finding out that what was supposed to be fried chicken was actually a towel.

In a viral post Alique Perez shared how horrified and disgusted she was to find out that her chicken was a towel hidden beneath the deep-fried crumb coating.

“Just something that frustrated me this late. We had Jollibee delivered via Grab. Ordered chicken for my son, while I was trying to get him a bite, I found it super hard to even slice. Tried opening it up with my hands and to my surprise a deep-fried towel,” Perez wrote on Facebook.

She described the incident as her “worst first”.

“This is really disturbing ... How the hell do you get the towel in the batter and even fry it?!

“I really thought that the posts complaining about weird stuff in their orders were just all made up, now I know that it really happens! So disgusting and embarrassing ... to think that you're even branched in BGC [Bonifacio Global City].

“There's a first for everything. And this has been the worst first!” said Perez.

Perez questioned the restaurant's cooking method and if they used the same oil after frying the towel.

“The essence of the towel contaminated the oil and the batter from the supplier, so how many chicken joys are affected? We won't know,” she said.

After the post went viral, the Filipino Times reported that the restaurant was ordered to close down for three days.

Jollibee management said it was “deeply concerned” about the incident, and that it would conduct a thorough investigation.

“We are deeply concerned about this matter and have conducted a thorough investigation on the incident. It is unfortunate that deviations from Jollibee’s standard food preparation procedures occurred on the part of certain personnel of the store,” said management.