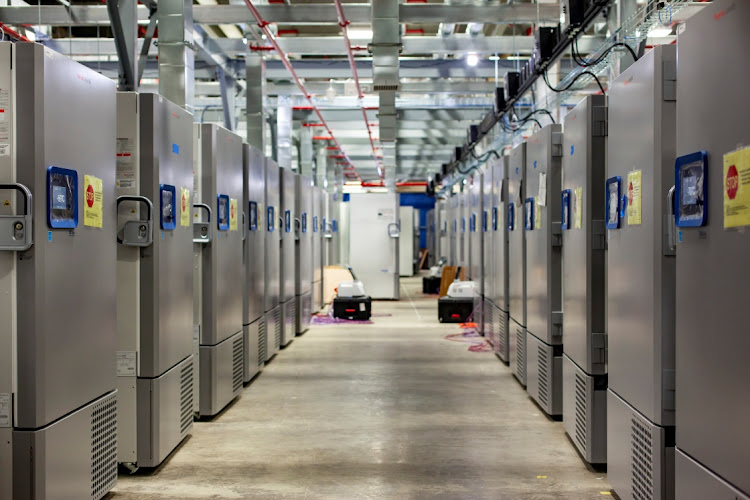 Freezers that can be used to store the coronavirus disease (Covid-19) vaccine are seen at the Pfizer manufacturing facility in Kalamazoo, Michigan, US. File photo
Image: Pfizer/Handout via REUTERS

The US Transportation Department said Tuesday it has made preparations to enable the "immediate mass shipment" of Covid-19 vaccines and completed all necessary regulatory measures.

The department said US agencies have been coordinating with private sector companies that will carry vaccines from manufacturing facilities to distribution centers and inoculation points.

It added it has established "appropriate safety requirements for all potential hazards involved in shipping the vaccine, including standards for dry ice and lithium batteries used in cooling."

The department is preparing to ensure deliveries of vaccine doses for about 40 million US residents through January, or about 20 million a month, officials told Reuters.

Healthcare workers and others recommended for the first inoculations could start getting shots within 24 hours after the vaccine receives regulatory authorization, the chief adviser for the US government's Operation Warp Speed program said on Tuesday.

Pfizer Inc has applied for an emergency use authorization (EUA) from the US Food and Drug Administration for its vaccine.

Officials ran a drill last month simulating shipments of vaccine to ensure that all regulatory approvals were in place to allow for immediate deliveries to begin in the coming weeks.

"The department has laid the groundwork for the safe transportation of the Covid-19 vaccine and is proud to support this historic endeavor,” Transportation Secretary Elaine Chao said in a statement.

Last week, Reuters reported United Airlines had begun moving shipments of the Pfizer vaccine, on charter flights to ensure it can be quickly distributed once it is approved, according to a person familiar with the matter.

American Airlines in November began trial flights from Miami to South America to prepare for its role in transporting Covid-19 vaccines, the carrier said Monday.

AstraZeneca said on Monday its vaccine for the novel coronavirus could be around 90% effective without any serious side effects, the latest drugmaker ...
Business
1 year ago

Russia's Sputnik V Covid-19 vaccine will cost less than $20 per person on international markets and Moscow aims to produce more than a billion doses ...
News
1 year ago
Next Article