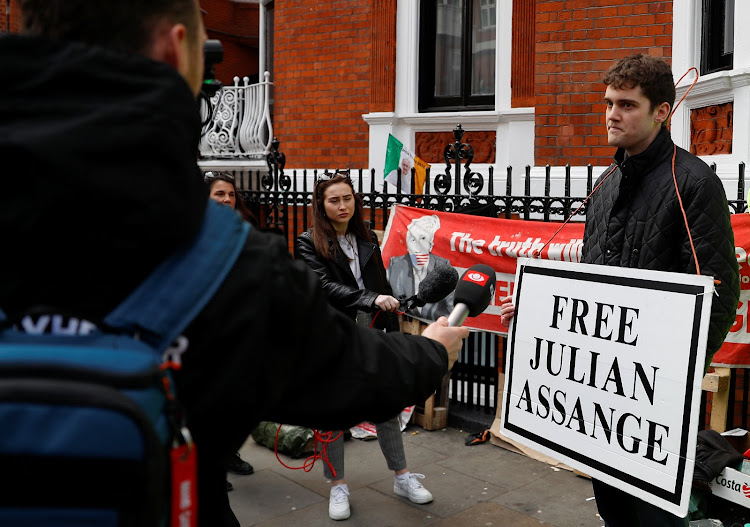 A supporter of WikiLeaks founder Julian Assange talks to the media, after Assange was arrested by British police, outside the Ecuadorian embassy in London, Britain, April 11, 2019.
Image: REUTERS/Peter Nicholls

U.S. President Donald Trump offered to pardon Julian Assange if the WikiLeaks founder provided the source for the hacking of Democratic National Committee emails before the 2016 U.S. presidential election, a London court was told on Friday.

Assange's lawyer, Jennifer Robinson, said she observed a meeting where former Republican U.S. Representative Dana Rohrabacher and Charles Johnson, an associate known to have close ties to the Trump campaign, made the offer in 2017.

Robinson said Assange was told that Trump approved of the meeting and that Rohrabacher would later meet with the president to discuss the reaction to the proposed deal.

She said the deal was presented to Assange as a "win-win" solution that would allow him "to get on with his life" and in return would also politically benefit Trump.

"The proposal put forward by Congressman Rohrabacher was that Mr. Assange identify the source for the 2016 election publications in return for some form of pardon," Robinson said in a witness statement given to the court.

During the 2016 U.S. presidential campaign, Wikileaks published a series of Democratic National Committee emails damaging to Democratic candidate Hillary Clinton that U.S. intelligence believes were hacked by Russia as part of its effort to influence the election.

Russia denied meddling and Trump has denied any campaign collusion with Moscow. A probe by U.S. Special Counsel Robert Mueller did not establish that members of Trump's campaign conspired with Russia during the election.

Australian-born Assange, 49, is fighting to stop being sent to the United States, where he is charged with conspiring to hack government computers and violating an espionage law over the release of confidential cables by WikiLeaks in 2010-2011.