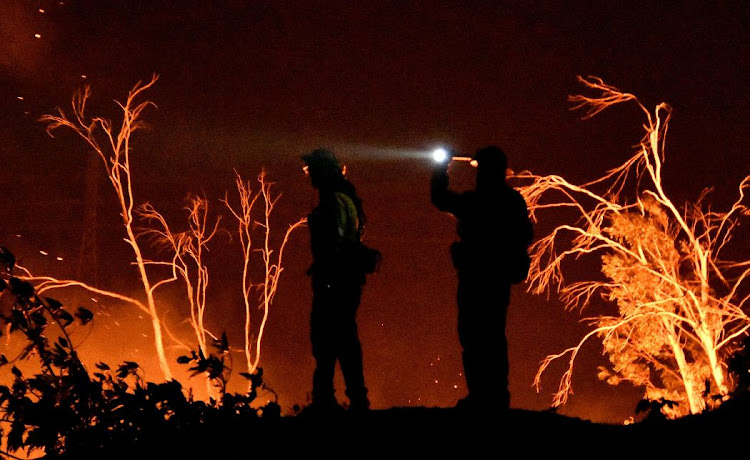 California Governor Gavin Newsom on Friday toured communities devastated by the state's raging wildfires and said the deadly, record-shattering fire season across the U.S. West should end all debate over climate change.

Newsom, a Democrat, appeared to direct at least some of his remarks at suggestions by U.S. President Donald Trump that poor forest management, and not warming temperatures, were to blame for the raging conflagrations.

"I'm a little bit exhausted that we have to continue to debate this issue. This is a climate damn emergency. This is real and it's happening. This is the perfect storm," Newsom, 52, said as he stood on charred, smoky mountain terrain near Oroville in Northern California.

The North Complex fire, which first broke out in August, exploded across more than 200,000 acres (80,937 hectares) this week, killing at least 10 people as it raged near Oroville and surrounding communities.

All told some 100 wildfires across the U.S. West have burned an area nearly as large as the state of New Jersey, putting half a million people under evacuation alert in Oregon and pouring out thick smoke across three states.

Wildfires have killed 24 people since erupting in August.

"The debate is over around climate change. Just come to the state of California. Observe it with your own eyes," Newsom said.

"California, folks, is America fast forward. What we're experiencing right here is coming to communities all across the United States of America unless we get our act together on climate change, unless we disabuse ourselves of all the B.S. that's being spewed by a very small group of people that have an ideological reason to advance the cause of a 19th century framework and solution," he said.

The governor demurred when asked by reporters to respond directly to suggestions by Trump, a Republican, that seasonal wildfires could be mitigated if state and local officials had worked harder to clear dense, dry underbrush.

Newsom said he had spoken by phone to Trump this week and that the president had "reinforced his commitment" to aid firefighting and recovery efforts.

"I'm not going to suggest for a second that the forest management practices in the state of California over a century plus have been ideal," the governor said. "But that's one point. But it's not the point. The reality here is the mega fires that we're experiencing come from these mega droughts that we've experienced."

When Mother Nature gets angry there's usually astonishing damage and a tragic number of lives lost.
News
3 years ago
Next Article