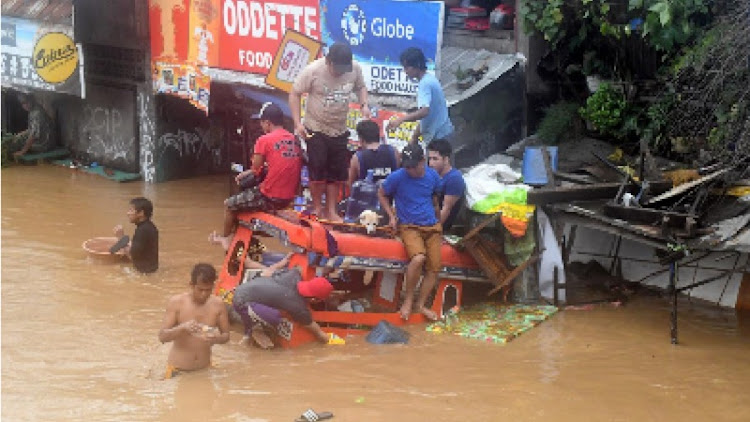 Residents are seen on the top of a partially submerged vehicle along a flooded road in Cagayan de Oro city in the Philippines. REUTERS/Froilan Gallardo

A tropical storm in the Philippines triggered mudslides and flooding that killed nearly 90 people, while dozens are missing, police and disaster officials said on Saturday.

The casualties, most of them inflicted late on Friday, were all on the main southern island of Mindanao, they said.

"We're are still trying to confirm reports of a farming village buried by a mudslide," said Ryan Cabus, an official in Tubod town.

He said power and communication lines to the area had been cut, complicating rescue efforts.

The weather bureau said the storm had gathered strength over the Sulu Sea and was packing winds of up 80 kph (50 mph) and moving west at 20 kph.

It was heading out over the sea by mid-day on Saturday and would have moved clear of the Philippines by Monday, it said.

Emergency workers, soldiers, police and volunteers were being mobilised to search for survivors, clear debris, and restore power and communications.

The nearly 90 deaths were reported in various places including 39 in Tubod, El Salvador and Munai towns in Lanao del Norte province.

In Zamboanga del Norte province, police said 30 people had been killed in the town of Sibuco town and six in Salug.

Three people were killed in Bukidnon province, while politicians in Lanao del Sur province said seven people had drowned in flash floods there.

Sixty-four people were reported missing in floods and landslides, according to a tally of reports form officials and police.

The Philippines is battered by about 20 typhoons every year, bringing death and destruction, usually to the poorest communities of the poor Southeast Asian country.

Last week, 46 people were killed in the central Philippines when a typhoon hit.

The Philippines' coast guard said on Friday it had rescued 252 passengers and crew and recovered five dead people from a ferry that capsized.
News
4 years ago

The last time white Zimbabwean farmer Rob Smart left his land, it was at gunpoint, forced out in June by riot police.
News
4 years ago
Next Article