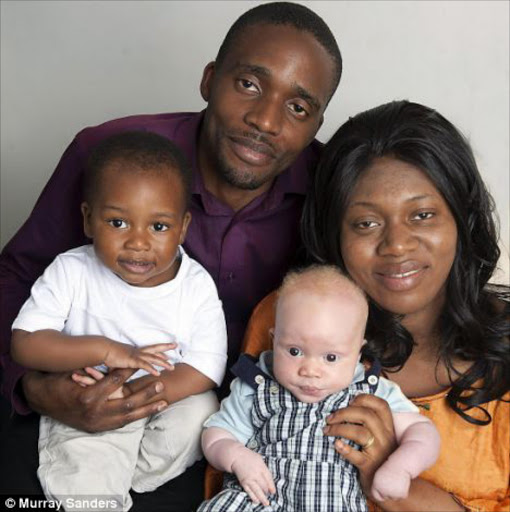 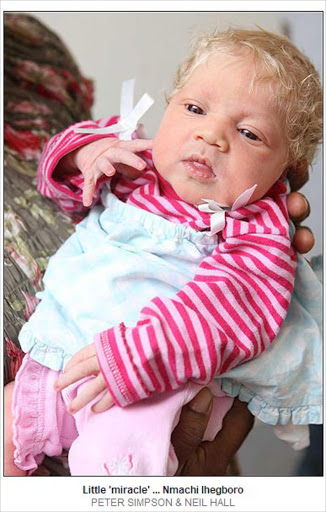 “Wow, is he really mine?” - Another African man is shocked in the hospital delivery ward

A black couple told this week of their shock and  mystification when their son was born with white skin and blond hair.

Francis Tshibangu admitted:  ‘My first thought was “Wow, is he really mine?”.’

Congo-born Francis and his wife Arlette already have a two-year-old boy, Seth, whose features reflect his African parentage.

It is thought that baby Daniel, now 11 weeks old, has a slight genetic mutation.

He is not an albino, Britain's Daily Mail reports.

"I have been with my wife for three years and there was never a question of infidelity, but seeing his white skin was a surprise to say the least.

"When I bent down and kissed him I got a better look at his features and could see he looked just like me and Arlette. He has my nose and my wife’s lips."

His 25-year-old wife said: "The reaction in the operating theatre was one of shocked silence, myself included.

"But as the nurse put his little pink body in my arms I bonded with him instantly. When I looked at him all I felt was love. Like any mum who has just given birth, my main concern was that he was healthy, which he is."

Mr Tshibangu said: "I know there will be some who say my wife has had an affair but I trust her completely and know that isn’t the case. Even if she’d had an affair with  a white man, you would expect a mixed-race baby with black hair, not a white baby with soft blond hair like little Daniel".

He added: "You can see people looking at us thinking, 'What are that black couple doing with that white baby?' I am sure there are a few people who think we have stolen him.

"But to us, his skin colour isn’t important. All we can say is that Daniel is our miracle and, though we are shocked by his white skin, we feel very blessed. He’s beautiful."

"We are all of us genetic mixtures to some extent, and occasionally you'll have a convergence of the pale versions of these genes in African-Americans and African-Caribbeans who have a mixed black and white ancestry," Bryan Sykes, professor of human genetics at the University of Oxford, told the BBC.

Another expert, Professor Ian Jackson, an expert in melanocytes -- cells that produce pigment -- at the British Medical Research Council's Human Genetics Unit, points out that there are four types of albinism, all of which allow different levels of colouring to develop in the skin, hair and eyes.

"In type 2 cases, we see creamy skin and yellow or light brown hair, which sometimes darkens with age," he told AOL News.

Jackson added: "Albinism is more common in West Africa than the rest of the world".

The condition also could have lain dormant for many years.

"It's a recessive trait -- which means that carriers don't show any signs of albinism -- so you can go many generations and not see any physical evidence of albinism in a family," Jackson explained. "It's only when two carriers have children together that you see it, when it will likely appear in a quarter of their children."